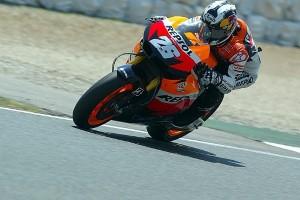 MotoGP riders had a shortened practice session ahead of this weekend's Aragon Grand Prix in Spain, due to a power outage that meant bikers could only get in one run. However, that one test showed that hometown favorite Dani Pedrosa may be out in front when the race kicks off on Sunday.

Pedrosa already holds the lap record for the track, which is 1:49:521. He couldn't quite match that during his practice session, but he came very close with a time of 1:50.281. He was followed by defending champion Jorge Lorenzo of Yamaha as well as his Honda-mate and points leader, Casey Stoner.

Moving further down the finishing order, there was a clear demarcation between Hondas and Ducatis. Stoner, Marco Simoncelli and Andrea Dovizioso made it three Hondas in a row, followed by three Ducatis: Randy de Puniet, Nicky Hayden and Valentino Rossi, who is sporting a new partially-aluminum chassis.

The power outage looked to be a momentarily delay at first. There was nothing wrong with the track, but the timing and scoring systems were offline. Once the problem was traced to a blown backup generator, however, officials had to cancel both the MotoGP and Moto2 sessions. Both classes will get extra time on the track tomorrow morning to make up for the issue as officials work to restore power.