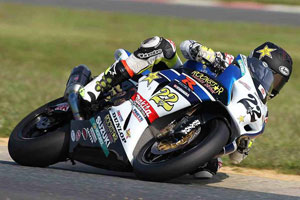 Sunday's race was one of the most exciting in recent history and Blake Young took the spectacular win on his Yoshimura-prepared Rockstar Makita Suzuki GSX-R1000. Team mate Tommy Hayden (pictured) represented well on Saturday, bringing home an impressive third-placed finish and when all was said and done, Young finished out the season in second-place overall while Hayden finished third.

In Saturday's 23-lap race, Young battled with Hayden for the final podium spot but wound up relinquishing that position to his team mate and ended up in fifth. On Sunday, however, Young pulled out all the stops. He got off the line in second place on his Rockstar Makita Suzuki GSX-R1000 and was dicing with up to eight other riders all separated by mere tenths of a second. Young swapped out the lead multiple times before capturing the breathtaking victory.

"My Yoshimura-supported Rockstar Makita Suzuki team has worked hard all year long," said Young. "Although I'm happy to get the win, finishing second in the Championship was tough. But in the race, I just wanted to show what my team was capable of. I wanted to bring home the win for them because they deserve it. They know how to win Championships and I'm still learning. They've stuck by me and I want to say my guys - 'thank you for everything.' Overall, I'm happy that I've had the season that I've had and I'll come back next year and try harder to put forth a better effort, because that's what my team deserves."

Meanwhile, Hayden came into the weekend with the attitude that he was going to "win or die trying." On Saturday, the Kentucky native overcame a lacklustre start, moved quickly through the field on his Rockstar Makita Suzuki GSX-R1000 and finished on the podium. On Sunday, he got the holeshot and led the multi-bike freight-train for much of the race before suffering a get-off while in second place. Fortunately, Hayden wasn't harmed but neither was he able to rejoin the race.

"Overall the weekend was pretty good," said Hayden. "Yesterday, we were on the podium and today my Rockstar Makita Suzuki GSX-R1000 was fast in the race and I was competing for a win. Unfortunately, I made a mistake and tipped over. It's definitely disappointing to end the season like that, but I went out trying and I feel good about that."