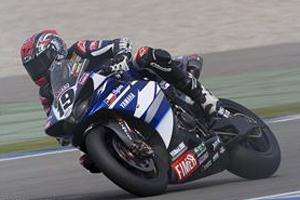 Female racer Melissa Paris will be heading overseas to compete in the upcoming Fuchs Silkolene British Supersport Cup Championship at the Brands Hatch season finale, which is currently scheduled for October 7-9.

Paris has proven that she can beat many male riders when she hits the course, so she should be fun to watch in the British competition. Paris, who is married to fellow pro rider Josh Hayes, will be using a MotoDex-backed Yamaha R6.

MotoDex Performance First UGmbH principal Tony Dexter told Cycle News that he was "absolutely delighted to be taking Melissa Paris to the grid for the first time in the last round of the prestigious British Supersport series at Brands Hatch, in our own livery and in our first year of business. We are not just coming to play. We have a totally professional setup, a simply awesome Yamaha R6 and Melissa has proven herself time and again that she can run with the 'big boys.'"

Paris currently competes in the AMA Pro Daytona Sportbike series, but many American riders are making the switch to England, such as John Hopkins and Jake Zemke. Paris hasn't officially announced if she is switching as well, but the trial should provide a glimpse of that potential.