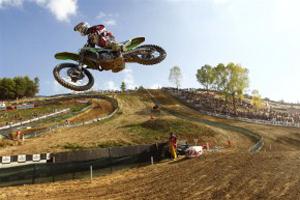 The United States has announced its three riders set to represent the squad in the upcoming Motocross Des Nations, which is scheduled for September 17-18, in Saint Jean D'Angely, France.

Veteran Motocross Des Nations riders Ryan Dungey and Ryan Villopoto will lead the team, with newcomer Blake Baggett joining them for the first time. Baggett will be riding in the MX2 (250cc) class, but it's not confirmed who will race MX1 (450cc) or MX3 (Open) between Villopoto and Dungey. Given Villopoto's recent form in AMA, it's safe to say he'll probably be racing MX1, the tougher of the two classes. Dungey was part of last year's team, which took home the title.

The team will once again be managed by Motorcycle Hall of Famer Roger DeCoster, who has taken charge of the U.S. team in recent years. DeCoster won six Motocross Des Nations himself as a member of Team Belgium.

"It's going to be a lot of fun to go over there and we're going to have a huge target on our backs," Villopoto told Cycle News. "I think we have a strong team but we need to have three good motos when we get over there. Mistakes can come from any one of us so we need to be sure we're smart about it."