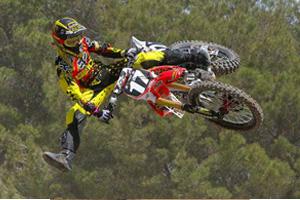 Honda has announced that 250cc rider Justin Barcia will be stepping up to the 450 class to fill in for injured riders Josh Grant and Trey Canard.

Big Red has had a number of problems with injuries this season, and they had to bring in Kevin Windham to fill in for their two sidelined riders. Canard returned to action just a few weeks ago, but almost immediately re-injured himself. With Windham opting to quit racing in the current Motocross series, the team is instead deciding to promote Barcia, who will ride the CRF450R until the end of the season.

Barcia is at seventh overall in the 250cc class and thus doesn't look likely to make a serious run for the title anyways with just a few races left on the calendar. He has some 450cc experience in the past as well.

"I'm so grateful to have this opportunity to ride the Honda CRF450R in the 450 class," said Barcia in a team release. "I can't thank Geico Honda team owners Rick Zielfelder and Jeff Majkrzak enough for allowing me to take advantage of this opportunity. I raced the CRF450R to the overall win at the Bercy Supercross last year and I felt great competing on the bike, so I'm excited to now get the chance to race several rounds in the motocross series on it."