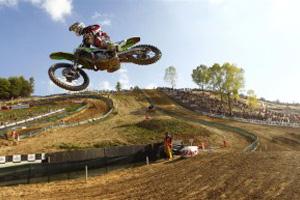 Professional racer Justin Bogle turned heads at the recent Ponca City MX event, as he nearly swept all of the pro motocross races.

Bogle won the 250 Stock, 250 Modified and 450 Stock classes in easy fashion, and appeared to be on his way to a clean sweep of all four pro classes. However, trouble arose in the second 450 Modified moto. After winning the first race in the class, Bogle had to card a DNF when a mechanical problem arose with his bike.

That unfortunately killed his dream of winning the 450 Modified and taking home all four trophies. Instead, it was Kawasaki rider Jacob Hayes who stepped up to fill the void left by Bogle's absence in the class.

Bogle was far from the only rider who put in an impressive showing over the weekend. Honda Red Bull's Cooper Webb also took home three trophies, albeit in lower classes. Webb won the 85/150 Stock and Modified as well as the 150 Four-Stroke Thru-16 Championships. However, he also came undone in his fourth competition, which was the 112 Supermini Thru-16 class. Adam Cianciarulo of Kawasaki ended up winning the Supermini competition with a 1-1 finish.