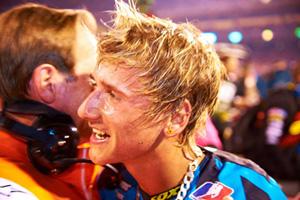 Steven Frossard and Ken Roczen were able to win their respective classes at the recent Motocross Grand Prix event held at the Uddevalla Circuit in Sweden.


Frossard, racing in MX1, was able to get his second overall win of the season. He did so in dominant fashion, earning first place in both races of the weekend. However, the weekend was ultimately most beneficial for Antonio Cairoli, who leads the competition in points. Cairoli finished third, but the bigger news was that Clement Desalle, Cairoli's closest rival in the point standings, was forced to sit the race out with a thumb injury. That allowed Cairoli to expand his points lead to 10.


It was also a good weekend for Evgeny Boryshev, racing for Honda, who had his best-ever weekend as a pro, finishing 2-4 for second overall.


In the MX2 competition, it was once again Ken Roczen coming out on top with a 1-1 performance. Roczen has been spectacular this season, and this race allowed him to extend his already-large points lead over KTM Red Bull teammate Jeffrey Herlings. Herlings finished 3-2, but Roczen now leads by 14 points in the competition.