Frossard Superb For Second Victory Of 2011 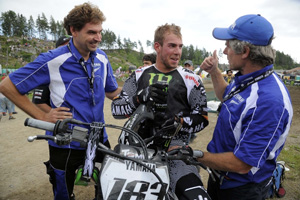 Frossard Superb for Second Victory of 2011
Monster Energy Yamahas Steven Frossard scored his first shut-out of the season by taking the factory YZ450FM to victory in both motos at Uddevalla for the Grand Prix of Sweden. The Frenchman celebrated his second triumph of what is becoming a standout 2011 maiden campaign in MX1-GP. â€¨

The visit to Scandinavia and round eight of fifteen reactivated the series after a one-week break and started another intense spell of three races in three weeks. Uddevalla was covered by cloudy but bright skies and the track benefited from natural watering of showers on Saturday and early Sunday morning. The layout boasted several small alterations and the terrain was partially loose with the top-soil barely covering a hard and slippery surface. Frossard was competing at the site of his very first career success in 2010 in the MX2-GP class and his decent feeling with a tricky track was assisted by two decent starts. The 23 year old watched by 24,000 spectators - was lucky not to become a victim of Antonio Cairolis second corner crash (even if he was caught on the left shoulder by the incident) at the beginning of the first moto and then bided his time for virtually the entire race distance behind Evgeny Bobryshev before moving past the Russian with two laps to go before the chequered flag. Frossard led the field from start to finish in the second outing and comfortably controlled a gap over Cairoli. Team-mate David Philippaerts was unfortunate. The Italians front brake was rendered useless by a flying rock in the first moto and the former world champion had to endure a large phase of the race using only the rear stopper. Philippaerts was able to enjoy a run-free in the second race (after an excellent launch alongside Frossard from the gate) and beat three other riders to claim third position and give the team two machines inside the Moto2 winners circle. â€¨â€¨Third MX1 representative Anthony Boissiere was twelfth overall. His first moto position of eleventh his better finish of the day compared to the fifteenth of the second. â€¨

In the points table Frossard has firmly pushed himself back into contention for the world championship. He is third but only 22 points (the previous gap was 35) away from the red plate he previously wore at round three. Philippaerts is sixth and 25 points from the top four while Boissiere is fourteenth. Yamaha are second by just nine points - and vying for the lead in the manufacturers standings. â€¨

The Grand Prix paddock will now head south to Teutschenthal in Germany and then east across to Kegums in Latvia. The eastern European jaunt will bring the series to round ten and complete two-thirds of the calendar.

It feels really good to win again. I like this track even if it is slippery and difficult! I tried to stay focussed and ride calmly and my good starts helped a lot with this. It wasnt easy out there but it was easier thanks to that. I was lucky at the start of the first moto because I almost crashed with Antonio and I actually hit my shoulder when it happened. It has been difficult to keep consistent because of my hand injury but it is getting better all the time. We made a couple of small changes on the bike this weekend but I felt really good on the YZ450FM. Cairoli was fast in the second moto but I pushed hard in the beginning because I knew he would be strong towards the end. â€¨

The second race was good. De Dycker passed me for third at one point but I kept patient because I knew he wouldnt have the condition for the full forty minutes. Today was not really my day. This is not really my track and I struggled to find grip all weekend. In the first moto the problem with the brake meant that it was a very hard to complete the race. I feel that a podium would have been possible today but motocross can be like this. We will hope for better in the next race.

Gautier Paulin captured third position on his prototype YZ250FM at Uddevalla and the Grand Prix of Sweden to toast his fifth consecutive podium result of the 2011 FIM Motocross World Championship after eight rounds of fifteen. â€¨

The Frenchman was a strong runner-up behind eventual GP winner Ken Roczen in the first moto and rode another lonely race to third spot in the second outing for his spoils in Scandinavia. Uddevalla was slippery and deceptive and the snaking layout once again placed emphasis on achieving a good start. Paulins launches from the gate allowed him to jump into positions inside the top three, even though he was unable to match Roczen on the day. GP21 was pushed to the third step on the rostrum courtesy of the second moto classification - even though he had tied on overall points with Jeffrey Herlings.


Fifth in the MX2-GP Swedish ranking was friend and fellow Monster Energy Yamaha Christophe Charlier for a personal best finish in just his second season at world championship level. The Frenchman had recovered from the broken bones in his left hand and took out his recent injury frustration on the pack and his mid-top ten rivals. The former European Champion scored a pair of seventh positions and showed good resilience to climb the leader-board. â€¨

In sixth was Bike it Cosworth Wild Wolf Yamahas Arnaud Tonus. The Swiss rued some ineffective starts and a second moto mistake that should have meant a result better than eighth. His recovery and sixth position from the first moto helped towards a haul of 28 points and continues the stylish riders run of consistency. British Champion and team-mate Zach Osborne had the speed across the Uddevalla bumps, evident through his lap-time at the very top of the timing screens in Saturday practice, but a crash on fifth corner of the first moto ruined a potential top three score. He recovered to eleventh but the American complained of a lack of energy and could do no better than tenth in the second race. Monster Energy Yamahas Harri Kullas left Sweden frustrated with bad starts and a lack of rhythm that produced only twelfth place overall. â€¨

Paulin has closed the gap to Tommy Searle and third place in the MX2-GP standings from 34 to just 10 points. Osborne is now 42 behind his brand-mate while Tonus is sixth. Kullas is eighth while Charlier sits in eleventh. â€¨

Getting on the podium again feels great and even though I want to be leading I am having a lot of fun on the bike. I think they made a good job with the track and also the blue flags as we went through the back-markers. I started in second place in the first moto and pushed hard to keep the rhythm with Ken even though he was too strong for us today. I thought I had a problem with my foot-peg in the second moto but it was actually my gear-shifter that was a bit bent. Third overall is good for me and we will work to be better. We actually did some tests recently and will have a few new parts for Teutschenthal. The team are working hard and we want a holeshot! We want to progress and reach the top of that podium.

I had good speed in the motos. I had a terrible start in the first race but pushed hard to come back. I didnt take too many risks in the beginning to make positions because the track was still wet, very slick and virtually one line. After that I had a good rhythm and my lap-times got better. I got close to Van Horebeek and Anstie at the end; overall it was a strong moto. The track had been watered for the second race and I used all my tear-offs at the beginning. My speed was good at first but then my lap-times went off with a few mistakes. Im a bit disappointed with how the GP finished but considering this race has rarely gone well for me Im content with two top ten results. â€¨

I really struggled today. I was fast yesterday but today was a different story. Im having a bit of trouble with my energy levels and I dont know really what is going on. Im just getting over my wrist injury. I made a dumb mistake in the first moto. I came into the turn a bit too hot, caught the bale and went down. I threw away a good chance. In the second race I rode as hard as I could but it wasnt good enough. It is a hard schedule this year but I knew that coming into it. â€¨

I had to be a bit careful here because of my hand. It is only at about 80% at the moment but I think it will be stronger in the next week and I am looking forward to training more. I didnt take any risks this weekend so to come away with two seventh positions and fifth overall is a good result.