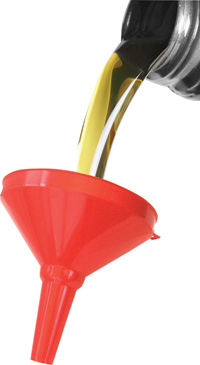 Learn what oil is right for your bike and why.


That's fine, if you drive a taxicab in Manhattan. You ride a motorcycle or ATV, and maybe a high-performance one. Sportbike engine rpm can reach well over 10,000. A mud-caked ATV or dirtbike engine likely runs more heat risk than a taxicab's engine. Run whatever you want in your taxicab, think twice about the lubricants you put in your powersports vehicle.

Group III oils - and here is where marketing mixes with the refining process - are also refined petroleum products, they're simply refined more thoroughly. This process raises the Viscosity Index ratings of Group III oils. It may not sound like a big step up from Group II, but it certainly can be. There is a lesser-used Group II+ designation, including oils that fit in between the viscosity-index ratings of Groups II and III.


The extended refining process of Group III oils gets them that much closer to purity. It also means they can be considered synthetic oils in the United States, though not in Europe or Japan. 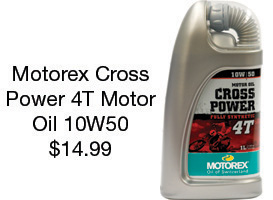 Groups IV and V are at a whole 'nother level. In fact, they are not refined but are synthetically engineered or man-made. You'll see the initials PAO used often to describe Group IV synthetic oils. That stands for "poly-alpha-olefins" and one of their main strengths is that they remain oily - viscous - across an extreme range of temperatures. That's what your powersports engine needs, of course.


Group V oils are a diverse mix of synthesized elements one of the more popular you might see on a label is "polyol esters" (and, yes, there is a relation to polyester). 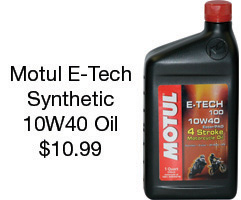 Created from pure chemicals, synthetic lubricants contain only material beneficial to their purpose; they contain no contaminants. Let me oversimplify: The molecules that make synthetic oils are generally larger, softer and oilier. All that means is they help reduce friction. They do their job better over a broader temperature range. This helps them last longer, though they're not perfect, and they still need to be changed out and replaced.

The refining and/or manufacturing of lubricants places them into one of five groups, conveniently called Group I, II, III, IV, or V. The first two are the lowest
forms of organic petroleum, and they're used to make traditional petroleum motor oils for your automobile, boat, and motorcycle. These oils are not bad; in fact they still make up the majority of motor oil used today. Think 10W-40 and NYC taxicabs. 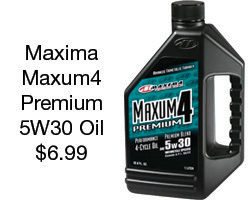 No value judgment here; liquids in these groups become motor oils carrying reputable name brands that have lubricated nearly every vehicle I've owned. It's just that these natural mineral-based oils consist of - even after the refining process - a broad mix of natural hydrocarbons, including some which can act as contaminants as the oil breaks down. Still, the taxicab test proves these can lubricate well, at least in certain engines. More importantly, they're accessible and relatively inexpensive. 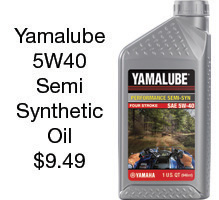 Also called "synthetic blends," semi-synthetic
oils are petroleum oils (from Groups I, II, or III) mixed with no more than 30 percent synthetic oil (from Groups III, IV or V). 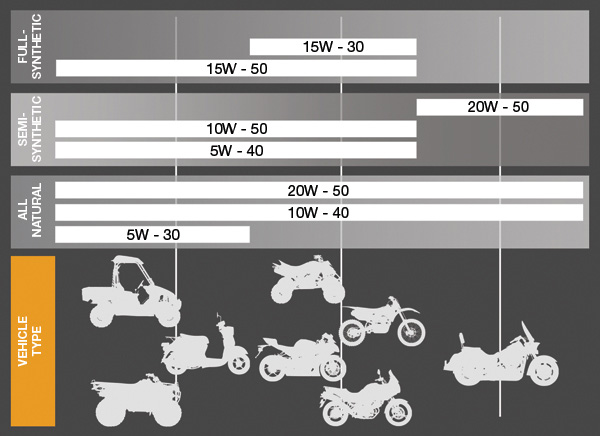 Q: Can I switch between mineral oils and synthetics, or do I have to stay with one for the life of the vehicle?
A:

You can switch back and forth between synthetics and non-synthetics, no problem.

Q: How do I dispose of used synthetic oils when I do my own changes?
A: You should dispose of synthetics and synthetic blends the same way you dispose of mineral oils - that is to follow all EPA guidelines for disposal, never dump in the trash or down a drain.

Q: Should some engines NOT run synthetic oils?
A: We have noticed some synthetic oils (Valvoline Durablend, for example) are not optimized for use in wet-clutch transmissions.

Q: Can I run "Pro Honda Oils" in my Yamaha sportbike, or "Pure Polaris Synthetic" in my Kawasaki ATV?
A: Yes, these and other OEM-branded chemicals will work in any brand of motorcycle, scooter or ATV. In fact, Pro Honda oils and chemicals have gained an excellent reputation among powersports enthusiasts of all brands.

Q: How do I know which type (not which brand) of oil to use, from 5W30 to 20W50?
A: Glad you asked. The Society of Automotive Engineers (SAE) introduced the numbered code system that we see on so many oil containers. Here's what the numbers mean. 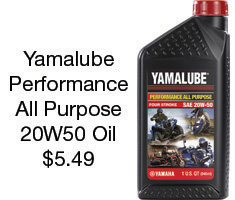 A single-grade (or straight weight) oil will be represented by something like "SAE30." That means the oil meets SAE tests rating its viscosity grade at "30" measured at 210-degrees F, a standardized engine operating temperature. A higher viscosity rating means the oil is thicker, again at 210 degrees (or 100-degrees C). A lower number means the oil is thinner or lighter. You want an oil that can be thin and start-up to protect the engine even when cold, but one that will also protect at 210 degrees.


Multi-grade oils are rated something like 10W-30. The first number denotes that at 0 degrees F, the oil has a viscosity of 10, and at 210 degrees F, a viscosity of 30. The W refers to Winter, not weight. A 5W-30 and a 10W-30 have the same viscosity at running temp, and only differ at start-up or cold running.


Thicker (higher viscosity) oils - those with higher SAE numbers - offer good engine protection at high temps, but can leave your engine drier at low temps, because they're thicker. So why not just run a thin oil like an SAE10? It will provide good protection at cold temps, but will not protect as well at higher temps, and you'll need to change oil much more often. That's why 10W-40 became the most popular multi-grade oil; it provides good protection at start-up and at engine operating temps.

Refer to and follow any advice given in your vehicle's owners manual.


What's Best For Your Bike 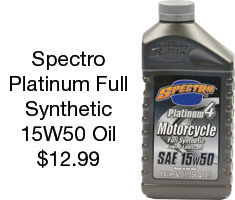 Chosing the right oil can be a real pain. Let us remove the guess work.

Makers of some high-performance engines suggest (require?) that owners use synthetic oils. That mandate is rare. But the benefits of synthetics and semi-synthetics are clear, unless you drive a NYC taxicab, of course.


Semi-synthetic and synthetic oils provide improved performance at high and low temperature extremes. High temperature performance is an issue for many motorcycle riders, from sportbike track riders to off-road mud riders. If you ride an air-cooled bike, synthetics and blends will help. For ATV and side x side owners who use their vehicles year-round for work and play, improved performance in freezing temps is just as important. 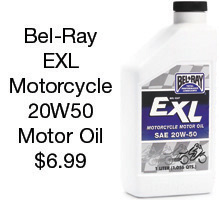 These synthetics and blends also mean improved fuel consumption and decreased oil consumption. You can run your engine slightly longer between oil changes. That's good for your pocketbook and good for the environment.


Plus, these oils help reduce engine wear and the build up of hydrocarbon sludge in your engine.


Any downside? There is likely a higher purchase price for synthetic blends, and even higher costs for synthetic oils. As noted above, you will save money in other ways by using these premium products.

Show it some love!

Oil changes are one of the easiest and most effective ways to prolong the life of your bike, and should be performed every six months or 3,000 miles.