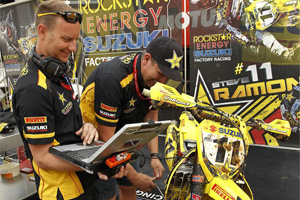 The Suzuki RM-Z450 has claimed every major off-road Motocross and Supercross title there is to win. The motorcycle - introduced to the FIM Motocross World Championship in 2004 and which owned the MX1 series in 2007 - was also one of the first to boast Fuel Injection (FI). The progression of this aspect of the motorcycle has been one of the finer and more interesting elements to chart over the past half a decade. It has also been one of the most important areas the Rockstar Energy Suzuki World MX1 has had to work with and evolve in their racing efforts. Fuel Injection and Data logging expert Roy Matheson - a New Zealander with experience in road racing before joining the crew four years ago - explains a little about his role and that of electronics in motocross.

What is the purpose of recording the behaviour of the motorcycle and what is the process?

"At the moment the data logging is ever-present and we record everything all race weekend. Most of the time we don't need it every session but when we do, it is there. If a rider says he is having a problem on one section or corner of the track then I can go exactly to that point at look at exactly what is happening, like RPM, throttle position, gear position and see how the rider is using the bike. We can then make some changes to the ECU to try and help. The ECU controls a lot of different things to do with the rideability of the engine and virtually all bikes have some sort of rideability control. At the beginning of the season we try to get a setting for the rider that will be effective across most the tracks and the bike has a few different sensors that normally adjust the engine for the weather conditions. The only thing the sensors cannot account for is the state of the track.

Isn't it hard to pin-point in Motocross with the variation a rider can use every lap?

"That's correct but with the GPS we can see where the rider is on every lap and in every corner."

You work with Italian firm GET. What is their input?

"We started working with GET right from when the RM-Z450 came along with fuel injection. At that point they didn't have any in-house ECU. What they did have was a GPS data-logging system that nobody else had at the time. We were lucky that there were some people at GET who were very interested in motocross and ride themselves so they were able to push along the data-logging side of it. It meant data-logging was developed towards the needs of motocross. At that time Suzuki had the first mass-production fuel injected motocrosser and as a factory team we were developing the ECU for the production bikes of the future. A little bit later GET came along with their own after-market ECU but we continued using only the data-logger."

Do electronics in Motocross really benefit the rider?

"At the end of the two-stroke era the bikes were getting pretty good and the steps were becoming very small in terms of improvement. With the four-strokes, each initial step was quite big but now the same pattern is happening. The next area in which to progress was fuel injection and we are at the stage with the factory bikes now where the steps are becoming smaller again. The changes are reducing each year but there are still things that help the rider and the customer especially."

Electronics are getting a bad name in road racing. Will it ever reach the same kind of level in Motocross?

"I don't think that will happen because the percentage of 'rider-motorcycle' is still so much in the favour of the rider when it comes to motocross. The electronics side is a small fraction of what already is a small part of any success when compared to something like road racing. Having said that, at the front of a Grand Prix any extra assistance you can give the rider is a gain."

Even though you have recorded data about the bike, any changes to electronics surely come from the rider's direct feedback...

"Totally. It all comes down to the rider and how he can communicate what he feels on the bike. It is another thing that separates the good riders from the really good ones. If he comes into the pits and says 'on this corner when I am starting to accelerate I have this problem' then you can help him quite a bit."

What kinds of options do Desalle and Ramon have then?

"Each rider has a switch on the handlebar that gives him a choice between two different maps. Basically we use the second switch most of the time out on the track so the rider can have a test and see if he has a better feeling with a second map I have put in; he doesn't need to come in and reset. Generally we try to make any set-up changes on Saturday and save any last resort for Sunday morning warm-up. For the race itself we will only use one map so the rider can concentrate fully on the moto and not make any changes accidentally."

How much of the ECU development is a priority for Suzuki?

"Well, from our side it all comes back to our basic testing at the beginning of the year and then how a few small changes will then go towards creating a really good base-setting for the production bike. The good thing about fuel injection is that any rider can buy software to make their own adjustments after that. We have found in general that the production bikes work very well in many different type of conditions or track."

Can FI have a say in the path to noise reduction?

"Yes, it is all linked together. It starts with intake and it goes to the design of the combustion area and the electronics and of course the exhaust system in the end. It all fits together so it has a role to play."

Is developing FI pushing up the cost of racing or riding motocross?

"I don't think so. The whole idea of is that the adjustment of a standard bike is easier and done in one shot. The performance should be better and more consistent. It gives more value to the user."