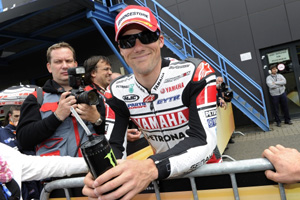 Yamaha Factory Racing rider Ben Spies delivered his finest qualifying performance of the year so far at The Assen TT today. The Texan had been consistently quick in the morning's extended final free practice having found a good set up for the Dutch circuit. The dry morning session saw him over 15 seconds faster than yesterday's wet practice, ending in third just 0.26 seconds from provisional pole. Spies then went on to attack the afternoon qualifying session and was rarely outside the top two. He had been on track to claim his first pole position start of the year until Loris Capirossi crashed in front of him on his final hot lap. As a result he will start from the front row in second position having finished just 0.009 seconds from Marco Simoncelli on pole. â€¨

Reigning World Champion Jorge Lorenzo enjoyed a similar morning practice to his team mate, finding a good pace to finish the final free session just behind Spies in fourth although he was less happy with his bike set up. The afternoon's qualifying proved similarly challenging with Lorenzo finding an improvement from the morning but still ending in fourth on the second row having been unable to find the perfect setting for the faster chicanes.

"The best qualifying of the year so far, it was a good session for us. We would have liked to get pole position but unfortunately on my fast lap Loris went down and there were a lot of yellow flags. I want to be a little bit upset but I want him to be ok a lot more than I wanted pole position. All in all it was a great qualifying, the bike is working really good, race pace is good so I'm confident for the race tomorrow. I don't know what kind of weather we are going to get so we'll see how it goes."

"Today has been a complicated practice and qualifying. We made many stops in the morning session and in the qualifying. The most important thing is we can see that our closest championship rivals are pretty close but I know we still need to make a step forward to be better. I have had problems in the fast corners today, I didn't have so much grip on the rear so we have work to do for tomorrow. I'm very confident the team will do a good job to be ready to fight for the podium for the 50th Anniversary. Obviously the weather is not helping and we should be ready for both wet and dry conditions."

"Not such an easy qualification, Jorge was complaining a lot about his feeling of safety on the bike in the faster sections of the track and also rear grip so we need to work on that for tomorrow. Finally fourth position is not terrible but the worst we have been so far this year. Let's see what we are able to do tomorrow morning to improve the package; this is our focus now."

"Ben did a really great job today. He pushed all practice and was clever to think about when to use the soft tyre as conditions were quite unpredictable during qualifying. I saw him very confident on the track this weekend so tomorrow I have high expectations that he will be part of the leading group. Jorge as we know is a fighter, even though he is starting from the second row I am expecting him to be one of the top four riders fighting for victory. The team is still working hard, after Barcelona we made a big improvement with bike set up and this is helping the riders."

Cal Crutchlow demonstrated his skill and bravery to mount a stunning challenge for a maiden front row grid position at the world famous Circuit van Drenthe in Assen this afternoon. â€¨

The Monster Yamaha Tech 3 Team rider powered his YZR-M1 machine to a best time of 1.35.329 to move into third position with less than a minute of today's qualifying session remaining. â€¨

But in a typically nail-biting finale, the 25-year-old was unforunately dropped down to the second row of the grid and he will start tomorrow's 26-lap Iveco TT Assen from sixth position for the third successive race. â€¨

Crutchlow's performance was even more impressive considering he was riding in considerable discomfort from the left collarbone he broke in five places just 13 days ago at Silverstone. Conditions for this afternoon's session were the best of the weekend so far, with no disruption caused by rain showers that had been predicted. â€¨

The dry track made riding a more physically demanding challenge for Crutchlow, particularly in the sections requiring fast changes of direction, though he showed his trademark grit and determination to finish less than 0.2s behind reigning World Champion and factory Yamaha rider Jorge Lorenzo. â€¨

Colin Edwards will start from eighth position on the grid, the American also producing a gutsy performance as he rode through the pain barrier once again. Muscle damage around his right ribcage suffered in a crash at the Catalunya round in Spain three weeks ago was more problematic for the 37-year-old today as he set a best time of 1.35.818. â€¨

Like Crutchlow, he was experiencing difficulty tackling the fast changes of direction. But key improvements to the set-up of his YZR-M1 machine made him more comfortable and he is confident he can fight for a top six in tomorrow's race.

"I was on the front row right at the end and it just got taken away, but I'm still really happy because I came here and didn't think I'd even be riding at this stage of the weekend. I thought I'd only be able to do a few laps because of my collarbone injury and here I am fighting for the front row. I think I went for it on my last soft tyre a little bit too early to be honest but I can't be disappointed. Sixth seems to be my position on the grid at the moment because that's the third race in a row I've started from that place. My shoulder is really sore now too. The 90-minute session this morning followed by another hour this afternoon means I can really feel the collarbone throbbing. The fast changes of direction are the biggest issue. Flicking the bike through some of those fast kinks is hard enough when you've got full strength, so for me having a big operation to plate my collarbone only last week, it is really difficult. To be honest I hope it rains for the race tomorrow, but I'll try my best for the Monster Yamaha Tech 3 Team whatever the weather."

"Riding in the dry made it pretty tough on my body today. With the extra 45 minutes this morning, it has been physically demanding. The collarbone I broke in Catalunya is fantastic but the damaged muscles around my ribs have hurt a lot today and made it hard to change direction. We changed a couple of things to the bike to make it more comfortable for me. The bike is more stable and easier to change direction and while it might not be an advantage for the lap time, it has certainly helped my ability to push more to my normal level. My lap times aren't terrible but in certain parts of the track it is hard to push. I just don't have the strength. Some of those changes of direction, you're flat-out in fifth gear and I just don't have the power to throw the bike around. Taking a deep breath was hard because of the ribs, but we got today out of the way and I might wake up tomorrow morning and miraculously feel better. I doubt that will be the case, but the race is a different thing. When the lights go out and the adrenaline kicks in, I probably won't feel a thing and I'll be giving it my maximum in the wet or the dry."