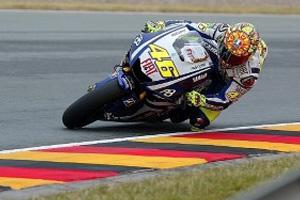 MotoGP is looking forward to the 2012 season, when the size restriction on engines will be lifted and everyone will be competing on bigger bikes. Teams are already designing their models for the 2012 competition, and it appears as if some technology is going to creep its way into the 2011 races.

Ducati has revealed the new "GP11.1," a version of their 2011 model that incorporates the developmental work done on the GP12 bike so far. The Italian manufacturer says that Valentino Rossi will be using the new bike this weekend at Assen.

"We decided to make the GP11.1, which is an 800cc engine in a GP12 chassis, in order to accelerate development on next year's bike, and also to provide our riders with a potentially better base for the current championship," said technical director Filippo Prezioso. "Considering that Valentino still hasn't ever ridden the GP11.1, this decision could require some races for the team to completely take advantage of its potential, but we decided to move forward with it because we believe it's an important step for our development process."

Rossi said he was a fan of the track at Assen, but acknowledged it will take some time to get used to the new ride.

Meanwhile, Rossi's Ducati teammate, Nicky Hayden, is scheduled to be upgraded to the GP11.1 ahead of the Laguna Seca race in the U.S. later this season.