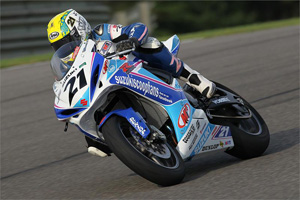 Team SuzukiScoopFans rider Elena Myers rode a flawless and determined AMA Pro SuperSport race to capture her first podium of the 2011 season at Barber Motorsports Park in Birmingham, Alabama at the weekend.

In Saturday's 17-lap race, 17-year-old Myers got a great start on her SuzukiScoopFans Suzuki GSX-R600 and charged into the lead after just a few laps. She went on to lead the pack for several more laps before settling into third position. Even so, while battling for her podium spot, Myers posted the fastest lap of the race. She and the other front-runners went on to gap the field and Myers was on the box for the first time this season.

"I got a good start on my SuzukiScoopFans Suzuki GSX-R600 in Saturday's race," said Myers. "I was starting on the second row from the fifth spot - that's my best qualifying this year - and I felt pretty good about that. I was second off the line and then we had a red flag. In the restart, I had another good start and was trying to put my head down and I led for a few laps, and even went back and forth with the lead guys, but they ended up pulling a gap. I made my way home in third place and I'm really excited about that. It's my first podium of the year and this was my first podium since my win last year. It's definitely a big confidence-booster for me."

Sunday's race again saw Myers get up front fairly quickly and she was running in third for several laps before bringing home a solid fifth-placed finish. Although Myers is contesting all the 2011 AMA SuperSport rounds, officially she is only competing in the West Coast Championship. This weekend's races at Barber were East Coast rounds and did not affect Myers' overall Championship points standings. She remains in fifth place in the West Division.

"Today went pretty well," she said. "I finished in fifth place. I didn't get such a great start but I was battling with the top guys again. I think overall it was a good weekend - a third and a fifth, you can't be too upset about that. My leathers are clean, I'm clean and my Suzuki looks good. A big thanks to everybody at Suzuki and my crew and everybody who really made this weekend a good one for me. Thanks to all the fans for coming out, and now I can't wait for Mid-Ohio."

The 2011 SuzukiScoopFans team's next event of the 2011 AMA Pro SuperSport season will be at the Mid-Ohio Sports Car Course in Lexington, Ohio on July 8-10th.