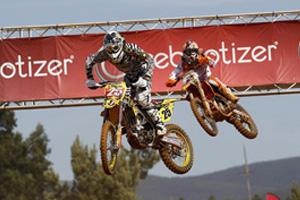 Clement Desalle and Jeffrey Herlings came out on top at the sixth round of the FIM Motocross World Championship in Portugal, winning the MX1 and MX2 classes, respectively.

Desalle's performance was the more dominant of the two, as he won both of his races in what appeared to be simple fashion. The defending champion, Antonio Cairoli, raced well enough for second place overall, while Evgeny Bobryshev was third. The win allowed Desalle to build his lead over Cairoli in the points standings, as the riders are now nine points apart.

That left the overall win to Herlings, who was the most consistent of the bunch, placing second in both races. Gautier Paulina and Zach Osborne rounded out the podium. With the results tallied, Herlings now leads Roczen by six points in the overall standings.