MotoGP Gears Up For Silverstone 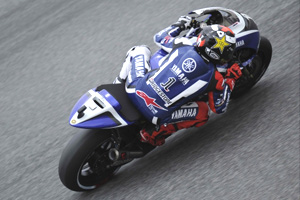 MotoGP returns to Silverstone this weekend for the second year in a row after an absence of 25 years. The paddock arrives in the UK for round six of the Championship preparing to enjoy the all new Silverstone facilities launched just two weeks ago. MotoGP Championship leader Jorge Lorenzo arrives fresh from his podium finish in front of his home crowd last weekend. The young Mallorcan rider is looking to replicate his stunning victory from pole position taken in his first outing at the modified Northamptonshire circuit in 2010. â€¨

Yamaha Factory Racing Team mate Ben Spies shares equally positive memories from last year's British GP, scoring his first ever MotoGP podium at Silverstone aboard the Tech3 Yamaha YZR-M1. Having shaken off a less than perfect start to this year, Spies delivered a textbook perfect ride to share the Catalunya podium with Lorenzo last week. The Texan is focused, motivated and looking to continue with his current form this weekend. â€¨

The 5.9km Silverstone circuit underwent major restructuring last year. The track has all kinds of character, a fast part and also a very tight infield. It looks a little bumpy in places, but with plenty of overtaking opportunities and remodelled sections including faster, sweeping corners to tailor it to the 800cc MotoGP machines.

"We managed to finish our home GP leading the Championship last weekend. I'm very happy because we are very consistent in the beginning of this season. Now we are going for our second visit to Silverstone, a track I like. Last year was the first year and I made one of my best races; it was almost perfect. I know this season will be tough, but Yamaha and I are working hard and are focused on each race results."

"I can't wait to get to Silverstone and get back on the bike again. It's a track I really enjoy riding and where I got my first ever MotoGP podium last year. Catalunya definitely felt like we were starting the season again, everything went smoothly and I felt really comfortable and able to challenge for the podium. We'll be looking to do at least the same in the UK so roll on Friday."

"Round six coming up, we're very happy to be going to Silverstone; we had a fantastic result there last year. I think it will be one of the tracks where will be more competitive than we have been. We are still leading the championship by seven points but we need to do something better to stay there at the front. Of course the podium is our first target but also a win is sometimes very important, for the riders especially, so let's see what happens this weekend."

"Silverstone seems to be a good circuit for Yamaha, we're going there with very high expectations and good morale after the double podium at Catalunya. We intend to start the right way on Friday and see what we can achieve. Both Jorge and Ben have a good history there so I think we will be very competitive."

After a weekend of contrasting fortunes in Catalunya recently, Monster Yamaha Tech 3 Team riders Cal Crutchlow and Colin Edwards have quickly turned their attention to this weekend's British Grand Prix at the legendary Silverstone circuit. â€¨

The Silverstone race is the all-important home round for rookie Crutchlow, who is enjoying a fantastic debut season in the 2011 MotoGP World Championship. The 25-year-old is eagerly anticipating his first appearance in the British Grand Prix and he arrives on home shores full of confidence after an outstanding performance in last weekend's Gran Premi Aperol de Catalunya. â€¨

He claimed a superb seventh place to score his best ever MotoGP result, and he's now targeting a challenge for his first top six finish on Sunday. Crutchlow's all-action style is perfectly suited to the long and super-fast Silverstone track and he enjoyed one of the highlights of his career last season when he romped to a stunning double win in the World Superbike round. â€¨

Edwards will make a welcome return to action after a right collarbone injury forced the popular American to miss last Sunday's Catalunya race. His absence ended his proud record of competing in 141 successive races, but Edwards is determined to bounce back in style this weekend and fight for a points finish. â€¨

Edwards has completely rested during the last days to aid the recovery process and his shoulder is already quickly gaining strength following the three-hour operation to insert a titanium plate and 13 screws at the USP Institut Universitari Dexeus of Barcelona last Saturday morning.

"I can't wait for my home race in Silverstone. Ever since I knew I was joining the Monster Yamaha Tech 3 Team, I have been thinking about the British Grand Prix. The race couldn't be coming at a better time after I scored the best result of my MotoGP career only a few days ago in Catalunya. That gave the whole Team a big lift and we can go into this weekend with a top six as a realistic goal. Although it is my home race, I actually don't have any extra experience of the track than the other guys. I've only raced at the current track once, just like the rest. Silverstone has always been a good track for me and obviously last year's double win in the World Superbike race was one of the highlights of my career. I know I can be fast on this track and we saw last year with Jorge Lorenzo's win that the Yamaha is a good package there. All I can do is assure the British fans that I will be giving it my absolute maximum to get the best result I can. The British fans have always been good to me and I know I can count on their support this weekend. I'm also glad Colin will be back this weekend. He's been an unbelievable help to me this year and racing without him just isn't the same."

"I'm already feeling much better after a couple of days rest and I'm now looking forward to being back on the bike and being with my guys in the Monster Yamaha Tech 3 Team. Obviously I am not going to be 100 per cent fit but the shoulder felt really strong immediately after the operation in Barcelona, so with a bit more time to recover, it has improved even more. I want to thank Dr Xavier Mir again because he did a fantastic job repairing the collarbone and without him, I'd have probably not been riding in Silverstone. It is not going to be an easy weekend but I will go out there and try my best to do a good job. It would be brilliant to get some points but I just want to concentrate on having a trouble free weekend because then I have a couple of weeks to let the bone heal further and be back to full strength by Assen. Part of me is still a little bit disappointed that I didn't get to ride in Catalunya, but I guess I'll finally get to start my 142nd MotoGP race, even if it is going to be one week later than planned! I've had great support in Britain going back to my World Superbike days and it is almost like a second home for me. I'm going to try and keep the weekend as relaxed as possible and enjoy myself. I've got lots of friends in the UK too, so I'm looking forward to catching up with them."