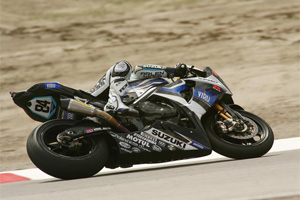 The sixth round of this year's Superbike World Championship takes place in Misano this weekend and Team Alstare Suzuki rider Michel Fabrizio is looking forward to his second 'home' round of the series.


The Italian has recovered from his 'flu and the badly bruised and battered left leg he suffered when he was hit by Spaniard Ruben Xaus in the first race in the last round at Miller Motorsports Park in America.

"I didn't feel anywhere near right throughout the race weekend in the USA and it was a big struggle, especially during practice and qualifying. I arrived in America feeling pretty rough - because of something one of my children had passed on to me - and on race day I guess I was about 80% fit. It then didn't help when I was taken out in the first race and injured my left thigh and leg. But that injury made me more determined in the second race and I really enjoyed the fight - especially with Laverty towards the end of the race. If there had been one more lap, I would've passed him for sure.


"I don't feel any extra pressure racing in Misano, even though people regard it as a 'home' race for me. I know that I will have a lot of friends and fans there, but it is just another race track and I want to do well at every race track I go to. For me, the season so far has been hard, but we all knew that before it began and I think we have surprised a few people along the way. I am pretty happy with how things have gone and I am so much more comfortable on the bike now then I was at the start of the season.


"Miller was the first time that I had really ridden in the wet and it was a very different experience and one that took a bit of getting used to. I am hoping that Misano will be dry and that I can do better in qualifying and Superpole than in the USA. As I said before, this series is so competitive that you have be on the first two rows of the grid if you are to have any chance of a podium. So my aim is to be on the first two rows of the grid, make good starts and get on the podium. I was on the podium at Misano last year, so it would be good to be on it again this year."