Landmark Victory For Frossard In France 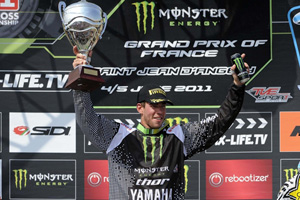 June 5th 2011 will live a long time in the memory of Steven Frossard as the 23 year old Frenchman clinched victory at his home Grand Prix at St Jean DAngely and celebrated his maiden success in the premier MX1-GP class in just his fifth appearance on the works YZ450FM. The fifth round of the FIM Motocross World Championship took place in cloudy but hot conditions near the west coast and in front of 32,000 spectators.


The shallow valley setting of St Jean was blessed by sunshine, bashed by a torrential thunderstorm and stifled by humidity in the space of forty-eight hours, which meant that the terrain varied in terms of grip and the density of the dirt. The riders had to carefully judge the surface that became increasingly bumpy through race-day.


Frossard leapt out of the start gate in Moto1 and took part in yet another gripping bout of action in the MX1 category as he led and withstood pressure from Tony Cairoli and team-mate David Philippaerts. Cheered on by an animated crowd Frossard was nevertheless coming under pressure from DP entering the final phases of the sprint until the Italian was caught out by the collapse of a berm entering a downhill corner and crashed. Philippaerts was able to remount for third but Frossard swept onwards for his second moto win of the year.


Number 183 needed more than half of the second moto to pass the Hondas of Bobryshev and Goncalves and reach 2nd position but his controlled performance confirmed his dominance on the day. Philippaerts was unlucky to suffer two early falls and was disappointed with 18th for 9th place overall.


Also at his home Grand Prix and at the site where he triumphed for the first time riding the YZ250F in 2005, Anthony Boissiere was 16th and 13th for 14th by the close of the afternoon.


Frossard has moved up to third place in the world championship standings and recovered some of the ground he lost after a turbulent U.S. Grand Prix last month. He is just 20 points from Clement Desalle at the top of the table. Philippaerts is fifth with Boissiere in fourteenth.


Monster Energy Yamaha now head for a two week stay in southern Europe where Grands Prix in Portugal and the staple venue of Agueda, some 80km south of Porto, and Spain (at the facility in La BaÃ±eza, north of Valladolid) will fulfil rounds six and seven of the 2011 schedule.

I was really focussed on my riding and for sure my goal was victory today. I was smooth and didnt take many risks. This is my first year in MX1 and to win here at St Jean is something so good for me. I want to thank my sponsors, my parents and everybody. It has been a really great day, especially because I havent ridden for three weeks. It is good to be third in the championship but I am still counting the cost of those mistakes in Glen Helen. I have to concentrate more and get back what I lost.

I felt good here today but Im not happy. We still have trouble with the starts but I was pleased with my speed and physically I am in good shape. The first moto was going well until I slipped. I then had another crash later when I touched a rider on a fast line and it was a big one. I had another problem in a corner and lost a lot of time to restart and was far behind. Eighteenth position is not good enough and bad news for the championship. Luck was not with me today but we have two more races close together now and a chance to recover quickly.

A packed St Jean DAngely and the Grand Prix of France saw two Yamaha motorcycles scale the MX2-GP podium at the fifth round of fifteen in FIM Motocross World Championship. 32,000 people was thrilled to see Monster Energy Yamahas Gautier Paulin take third position his first podium result at his home GP on his works YZ250FM and Bike it Cosworth Wild Wolf Zach Osborne lift his first trophy of 2011 as runner-up.


Warm weather across the weekend was briefly interrupted by a torrential shower on Saturday night that served to soften and churn the French mud. The track was a difficult prospect; all drops, climbs, tight turns and large jumps carved out of a terrain that was soft in places and rock-hard in others. In short the surface was demanding and saw many skilled pros making mistakes throughout two hard races.


Osborne was a protagonist on his YZ250F in both 35 minute and 2 lap sprints and fronted the pack briefly in the two outings despite confirmation of a small fracture on his right radius last Wednesday. The fit and fast American repeated his podium appearance at St Jean from 2010 thanks to two 3rd positions.


Paulin was able to defeat his brand-mate in the first moto and rode quite isolated in second spot behind Ken Roczen. The German crashed on the first lap of the second race and a four way dispute for the lead (and rostrum steps ) began. GP21 was just off the pace of the trio in front. He demoted Osborne to fourth but the 21 year old fired back (setting the fastest lap) and Gautier had to be content with being close, but not enough to disturb the lap chart order.


Osbornes team-mate Arnaud Tonus was 7th overall and slightly disappointed by mistakes in the second race that meant he could not improve on his Moto1 finish of 5th. The Swiss was 7th and just adrift of the front-runners. 9th in the MX2 classification was Monster Energy Yamahas Harri Kullas who rued two mediocre starts on a layout that was risky for clear-cut overtaking chances. Team-mate Christophe Charlier had decent speed on home turf and was even haunting the top five before a crash ended the first moto and dropped him to 8th in the second.


In the story for the championship Osborne holds fourth place but needs 37 points over Tommy Searle to reach the first three. Paulin is fifth and just 2 in arrears. Tonus (6th) and Kullas (9th) ensure four YZ250Fs in the top ten.


Grands Prix of Portugal and Spain now follow hard upon the French spectacle. The visits to Agueda and La BaÃ±eza will be rounds six and seven of the series and precede only a one week break before the northern-European trek to Sweden, Germany and Latvia.

I have had the speed all season but I just havent had the results so it feels good to turn it into a podium today. I didnt feel so comfortable in the lead but by mid-race I had picked it up again and passed Gautier. I had a few bad laps in the beginning and had to recover from that. By the time I was around Gautier, Tommy had already caught Jeffrey and was away. I was doing the maths with the points in my head. I havent ridden during the week since the U.S. Grand Prix but I knew I could take it the distance with my fitness. In the end I was close. I have to get a run of podiums going again now and the next track in Portugal is good for me.

I feel much better than I did in Brazil. I am enjoying my riding now and can play around with the bike a lot more. It was bad that Ken had a crash but it meant a change for all of us. I was feeling fast but I made some mistakes in the second moto and couldnt make the passes I wanted. I was close but not in touching distance. Zach was really fast and the lap-times were coming down. It was great out there. I think a lot of riders were making mistakes. The track was slippery and in some parts very hard and it was tough on the up-hills with the 250 because a mistake at the bottom would ruin a whole section. Anyway things are getting better for me. This was my first podium in France and Im really happy about that. In the end another good result to push on and keep being consistent.

Today started well with a good rhythm and lap in the warm-up. My start was not so great in the first moto and I finished fifth. There was nothing really that special about the race. I was pretty much on my own. I dont know what happened on the straight of the next start because my jump from the gate was really good but it was like I missed a gear or something. I was riding well and was looking to pass Charlier but had a big crash and I was mad about making another mistake. When you go down all that good rhythm you have built just goes. Anyway this race was better than Brazil and I hope for more in Agueda.

I think this is one of the worst tracks of the season for me. When it was raining yesterday everyone said oh no but I thinking yes!. The ground was a bit softer in the first race and I lost too many places on the first lap. It was an OK moto. I had not such a good start in the second moto and I was close to Roelants at the beginning. We are next to each other in the championship so I knew it was important to pass him. I overtook a few more guys and found the top ten again. Im quite happy for the weekend here and for how it worked out for the championship points.