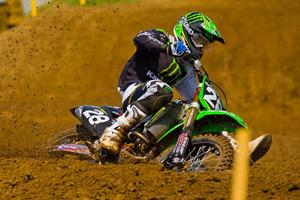 The Monster Energy/Pro Circuit/Kawasaki team dominated the first weekend of the AMA Pro Motocross 250cc Championship, and they continued their winning ways this weekend at Freestone Raceway in Wortham, Texas.

Dean Wilson, the overall points leader heading into the race, looked ready to continue his dominant ways with a first-place finish in the initial race of the weekend. However, it was ultimately his South African teammate Tyla Rattray who ended up with the overall win for Team Green. Rattray placed second in the first race and won the second for the victory, while Wilson slipped to third in the second race and a second-place finish overall.

"The track was really rough and it was also hot and windy," said Rattray. "I feel like my conditioning pushed me to the front. I've been working hard [off the track]. This is the best I've ever felt, and the most physically fit I've been in my entire racing career."

Yamaha's Kyle Cunningham got on the podium with a 3-4 performance, while Justin Barcia followed up a disappointing ninth in the first race with a second-place finish to come in fourth overall.

Wilson still holds the edge in the points standings, up five points on Rattray.