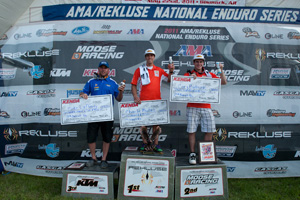 
Rain the day before the race and the morning of had made the track quite muddy as the riders lined up for the start of the first test. Mullins got off to a great start in the first section winning the section by 19 seconds. "It was great to start off with a big win in the first test and it helped my confidence as we moved on to the second test section," remarked Mullins. 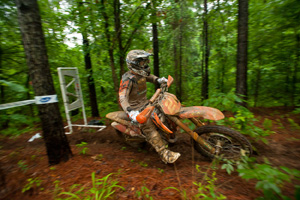 In the second test section Mullins lost his front in on the slippery course and lost a few seconds recovering from his crash. He still managed to finish the test with the second fastest time while Buttrick took the test win.


The third test of the day ended up being thrown out of the mix as a majority of the riders got lost on the course. Mullins stepped back up in the fourth test section and took the test win with Husaberg's Mike Lafferty and Nick Fahringer tying for 2nd while Buttrick took 4th. 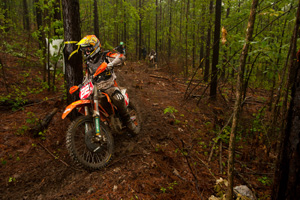 The final two test sections were very close with the top three riders finishing within a few seconds of each other. Mullins finished 3rd in both tests to earn the overall win while Buttrick put in his best effort to catch him finishing 2nd in the two sections to take 2nd overall.


The third member of the FMF/KTM Team, Russell Bobbitt, came into the fifth round with the points lead. Unfortunately, Bobbitt struggled on the slippery course as he tried to ride on an injured wrist from a riding accident three weeks back. "I tried to play it safe today in order to not injure my wrist any worse than it is. Every point I can earn counts in this championship so I am happy I was able to finish safely. Luckily there is a few weeks break before the next round and I am hoping to be in better form for that round," stated Bobbitt after the race. 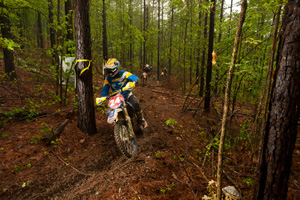 
The course was tough to tackle for the riders as rain the week prior had left the course very sloppy with large mud holes on the heavily wooded mostly single track course.


Lafferty, who had a mechanical problem keep him from a podium position at the round prior, was back up front from the beginning of the race through the end. "Mike was consistently fast today. He was definitely battling for the win," remarked Husaberg Factory Team Manager Antti Kallonen.


In the first three sections Lafferty finished inside the top three just a few seconds off the lead rider. His teammate, Nick Fahringer suffered in the first test finishing with a time approximately one and a half minutes off the pace. "The first test was very discouraging because I turned a very poor time. It was very foggy and misty and was hard to see and I just didn't ride that well," reported Fahringer. 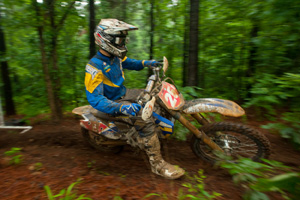 Despite a rough first test, Fahringer turned his race around in the remaining tests. He finished just one second after the leader in the third test section and he won the final two tests of the day to move his Husaberg into 4th place position. He stated, "I am proud that I didn't let my first test result ruin my day and I was able to show that I was competitive at the end of the race."


Lafferty rode a solid race in the final test sections and held on for 3rd overall. "It feels good to get back on the podium. I am still way back in the point standings but I'll take any improvement toward the top spot," remarked Lafferty.


The promoters only counted five of the six special tests toward the riders overall scores today as many riders got lost on the third test and it was thrown out. The riders will now have a few weeks break before heading to Upton, WY for round six of the series on June 19th.