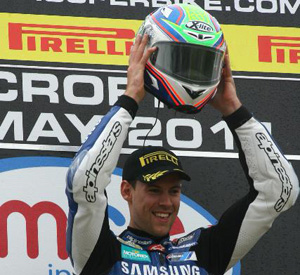 With a win and two further podiums, Samsung Crescent Racing enjoyed a very successful day's racing at the third round of the British Superbikes Championship at Croft today.


Jon Kirkham took his first BSB win in race one with team-mate John Hopkins placing second. And in race two, it was
Hopkins on the podium again, with a hard-fought third place. After three rounds of the Championship run, Hopkins is now
second overall - just three points off the leader - and Kirkham is sixth.


In changeable conditions, tyre choice was critical for race one: Hopkins chose intermediate tyres front and rear; Kirkham chose an intermediate front and slick rear. Both choices paid huge dividends as both riders found themselves able to easily-pass their competitors. Hopper had made a breakaway early in the race, in the company of Gary Mason, but when the pace car came onto the track, their gap vanished - and Kirkham joined them. Once the race resumed, on a drying track, Kirkham then found advantage in his tyre choice and was able to pass the leaders and take an assured win ahead of his team-mate.


Race two started badly when Kirkham - who had started from pole - became the unwitting victim of some wild riding, crashing spectacularly out of fourth position on the first lap. Hopkins meanwhile found himself fighting for grip despite
the dry conditions but resisted some determined attacks to secure his second podium of the day.

"I've got to be happy with today. It started well when I went fastest in warm-up. In race one I chose to run tyres I'd never run before - the Pirelli intermediates - and they proved great and I found a lot of confidence in them. I got
up to the pointy-end and we'd built up a good lead only for the safety car to come out. As a racer I wasn't too happy to be passed after that, but seeing as it was my team-mate JK then on a personal level that was awesome; he really deserved that race. I didn't have the grip to pass him back so by the end I was riding for the points.


"Race two didn't work out so well. I was struggling for rear wheel grip, so I did what I could and was happy to come away with another podium. Importantly I've come away with second place in the points table, just three points off the lead, with a stack more podium points - I'm joint-leading the table there. So for me, a very good day!"

"I really didn't expect that race one win, I don't even like those conditions, although being a smooth rider I do tend to get good results from them. I felt very settled immediately and I remember passing six riders in one lap. But I could see Hopper and Mason had got away so it was a huge benefit to me when the pace car came out. When I took the lead I could barely believe it. Then Hopper came back by, but I could sense I had the better grip - from the slick rear - to take the win. Even now I don't think it's sunk in - I've won a BSB race!

"There's not much I can say about race two. I was still buzzing from the race one win and so pumped to be on pole again. I didn't get the best start so I was in fourth place as I rode through 'Sunny Out' when I was hit and crashed out. Both bikes landed on me so I feel pretty beaten up, but luckily no broken bones. It's a shame as I was looking to collect more points and climb further into the top-six - I was fifth in the standings after race one and Hopper was Championship leader! - but there's always next time."

A fantastic conclusion to the weekend. JK's win in the first race was tremendous. Hopper again displayed such impressive race craft to capture his two podiums - the way he kept Josh Brookes at bay in the second race when he didn't quite have the grip really impressed me. The whole team were gutted for JK when he got taken out and certainly we all feel the stewards were right to issue a warning to that rider. I'd also like to repeat Hopper's comments on the Pirelli intermediates - we don't get to use them very often, but what a great tyre!

Importantly though, we're now challenging for the title. Hopper joint-leads the podium credits table and lies just three points off the Championship lead. JK, too, is now within the top-six Title Fighters, despite his no-score in the second race. We're just about where we wanted to be, so we'll be looking for more of the same, come Thruxton in 12 days time!"