Spectacular Double Victory For Laverty And The Yamaha WSB Team 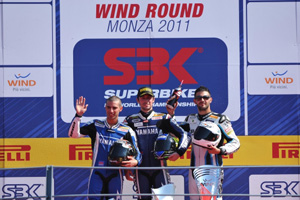 World Superbike Rookie, Eugene Laverty, put on a sensational display of race craft today to take a well earned double victory on his team's home track in Monza. Today's success signified not only Laverty's maiden win but also his first podium finish to date in the 2011 World Superbike Championship.


Laverty got off to a perfect start from second position on the grid to immediately take the lead in race one. The World Superbike rookie temporarily surrendered the lead in lap six on entering the " Prima Variante" but hastened to repossess first place on exiting the "Biassono curve", leaving Max Biaggi second. Race two saw a masterful display of race craft. Laverty initially fell back to ninth position after encountering a three rider collision in the early stages of the first lap. Putting his head down, he got straight to work, making his way through the bunch of riders ahead to sit behind team-mate Melandri until the final lap where he snatched the chequered flag.


Marco Melandri was also on flying form in the hot temperatures the historic track in Monza had to offer. The Italian completed the first race of the day in fourth position just missing out on a podium by 0.009 of a second. In race two, a good start off fifth position on the grid saw Melandri push up to third place by lap seven. The determined Italian gradually closed in on fellow contenders ahead, until mid race when the leader, Biaggi made a mistake at the first chicane resulting in a ride through penalty by the race direction. This gave Melandri the lead on the 14th lap. The final laps of the adrenalin filled second race saw the two Yamaha World Superbike riders battling it out for the win. Melandri completed the race crossing the finish line in second place, while Laverty just beat him by three tenths of a second. Both Yamaha riders, Melandri and Laverty, scored the fastest speed of the second race reaching a high of 333Km/h.


Eugene Laverty leaves Monza with a total of 85 points having jumped up from ninth to sixth place in the Championship standings after today's impressive performance. Marco Melandri is now sitting second in the classification with 118 points, just 27 points behind the current leader, Carlos Checa. 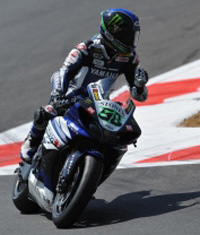 "I can't believe I got a double victory today. I came here aiming for a podium and now I'm coming away with two incredible race wins. It's fantastic. I didn't get off to a good start in the second race. I had to avoid a collision on the first corner, causing me to lose time. I also struggled a little with the tyres in the hot conditions. When it came to the last few laps, I couldn't believe my luck that it was just me and Marco in the lead. This double victory was particularly special to me, being the team's home track." 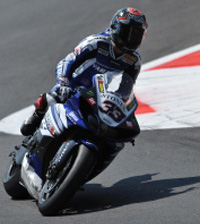 "It's been a tough but still quite a good weekend. I had difficulty finding the right set-up in order to provide more stability. We made progress before the second race but the bike was still quite agitated towards the end. In the last corner I struggled with the gears and the rear tyre locked causing me to go slightly wide. I'm really pleased to be on the podium and I really enjoyed riding the track. We have gained some important points but I'd like to get more next time!"

"It was a pretty amazing weekend. We knew after the two qualifying sessions that we had a good race pace with both riders and could definitely get a good result today. What we saw today is also the result of the hard work the team has done in the last month. I'd like to say a special thanks to everyone who made this happen! Eugene did a great job especially in race two. He initially lost time coming into the first chicane but he still managed to come back and win the race. We expected some difficulty for Marco seeing as the track was new to him but he proved to be extremely competitive. Both riders had some challenges with the set-up of their R1's over the weekend, especially Marco. Even though we got a double victory here we still know there is plenty of work to be done. We are heading to Aragon for tests this week and hopefully we will come back even more prepared for the upcoming race in Miller." 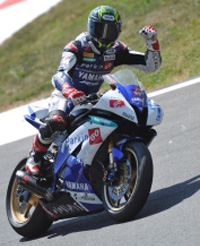 Four out of Four for Yamaha ParkinGO Team

Chaz Davies and Luca Scassa put in sensational performances in the melting sunshine in Monza to take the second one two podium of the season on their Yamaha R6 machines and secure a four out of four race victory for the Yamaha ParkinGO Team in the 2011 World Supersport season.


Chaz Davies got straight down to business, taking the lead from pole position to deliver his second victory of the season crossing the chequered flag more than 4 seconds ahead of fellow team-mate. The Brit ended a flawless weekend's racing in perfect manner and also recorded the fastest lap time of 1'48.526. Scassa was on equally impressive form on his home track in Monza, putting in a series of consistent laps, sitting comfortably behind his companion, to complete the race in second place. The spectacular performances provided by the Yamaha ParkinGO riders this weekend demonstrates the strength of theYZF-R6 machines that powers them to victory.


Following the impressive display of racing this weekend, both Yamaha ParkinGo riders are jointly leading the 2011 World Supersport standings with 70 points, ten points ahead of Parkes in third. Yamaha is topping the manufacturers standings by 32 points.


After the race Luca Scassa was informed by the SBK race direction that his entry will be refused for the Misano round on the 10th - 12th June. Insufficiently aware of the details of the rules concerning practice restrictions, Scassa rode ten laps on a standard R1 as a riding school instructor, three weeks ago. As the Misano circuit is not the selected testing circuit of the Yamaha ParkinGO Team, unknowingly Scassa caused an infringement of the regulations.

"I hadn't won a race in World Supersport and now two in a row - that's a pretty amazing feeling. I just can't say enough good things about my Yamaha and my team, everything has been perfect since Friday. I was pretty confident all weekend that I had the perfect race package and I'm delighted with the win. I am really happy with my bike and the results I have achieved so far." 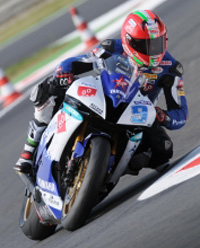 "Chaz was just perfect this weekend. He was too fast for me to catch up with him today so I'm very pleased with my second place finish. I made a mistake in Qualifying yesterday, so maybe if that hadn't happened I could possibly have done better today, but who knows! The team did a great job all weekend.


I sincerely want to apologize to my team, Yamaha and Infront Motorsports for making the mistake of riding the Misano circuit while not being allowed according to the rules. I didn't get any advantage from it, but now I realize it is clearly not allowed and was a stupid mistake to make. The only thing I can do now is concentrate on race wins in the rounds to come and compensate for not being able to score points in Misano."