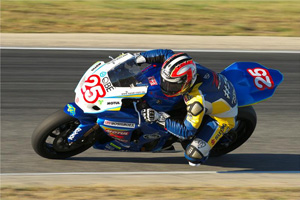 Team Suzuki rider Brodie Waters celebrated his 19th birthday by claiming pole position, overall victory and a new lap record aboard his Suzuki GSX-R1000 in the Prostock category at the fourth round of the Australian Superbike Championship at Perth's Barbagallo Raceway on Sunday.


Waters, competing in the Prostock Challenge - run in conjunction with the Superbike class - won both 15-lap races at a circuit he'd never raced at before, giving the Team Suzuki GSX-R1000 a debut win in the category and Waters a first-up win at the circuit. The round - the first of three Australian Superbike Championship rounds to be run alongside the V8 Supercars in 2011 - attracted a crowd of 33,000 to the 2.42km Perth circuit with both Superbike/ Prostock races broadcast on Channel Seven across the weekend.


The Australian Superbike Championship next heads to Queensland Raceway at Ipswich on June 3-5 for round five in the eight-round series.

"It's been a great weekend for Brodie in the Prostock class with the round win, pole position and a new lap record. We didn't get an opportunity to test before this meeting so it shows how good the Suzuki GSX-R1000 is straight out of the crate.


"It was a challenging weekend for the Superbike riders and the team, so to come away with Troy still second overall in the points in his rookie season and Robbie fifth for the round is a satisfying result.


"Troy is only in his third season of road racing and his first season on a Superbike and it was his first time at Barbagallo. Six riders went under the Superbike lap record in race two, including Robbie, so it shows just how competitive the class is this year.


"Scott did a great job substituting for Josh this weekend. It's not easy jumping on a Superbike after a five-month break from racing, and he should be pleased with his results.


"It's been great to showcase the Superbike category in front of a big crowd this weekend alongside the V8 Supercars."

"Two race wins and pole position is a great result for first time on the new bike at a circuit I've never raced at before. We didn't get a chance to do any testing beforehand with the Prostock GSX-R1000, but the bike was great straight out of the box. I'm looking forward to the rest of the '2 plus 4' meetings at tracks I've raced at previously.


"The Barbagallo circuit is awesome; technical in the first part and then two long straights."

"I felt good this weekend and it's good to be back to full race fitness. Fifth overall for the round and equal on points with fourth is okay, but I really thought I could have run with the front guys this weekend. I'm happy with my lap times, but my starts were pretty ordinary and by the time I made up the time I was into the backmarkers.


"Third fastest time in race two and under the old lap record proves we have the pace to run at the front. I'm looking forward to the next round at my home track in Queensland."

"After race one I was confident I could run with the leaders if I could get away with them. It was my first time at Barbagallo and it took me a while to learn the bowl (Turn Six), but my bike had the pace to win.


"To be honest, I'm pretty disappointed with how things finished up. I just didn't have the pace in race two, even though my lap and overall race times were quicker. We made some set-up changes for race two, but the pace was hotter at the front than in race one. I want to race for the win, not just points. To be still second overall in the Championship is a positive way to start the second half of the series."

"I'm really grateful to Team Suzuki for the opportunity this weekend. When I got the call three weeks ago to fill in for Josh I didn't hesitate in saying 'yes'.


"I haven't raced since early December last year, but I felt good straight up. The bike is just like the one I raced last year. I got a little lost with the set-up in race one, but we got things sorted for race two. I was happy to get into the 55s and lap nearly a full-second faster in the second race."