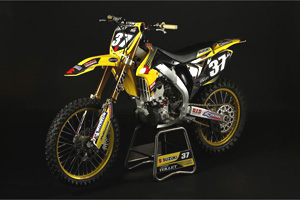 Suzuki Europe MX2 Technical Co-ordinator Jens Johansson has been the brains and precision behind the Suzuki MX2 Grand Prix effort since 2008. The Swede has overseen the expansion and progress of the project at the highest level and reached a peak during 2010 when the team grabbed the red plate for the first time as series leader and finished second in the championship itself (both rider's and manufacturers). Here he speaks about how the RM-Z250 is currently evolving on the MX2 GP Stage and the path for the future.

What were your aims for development of the RM-Z250 for the 2011 season?

"Well, to be honest I think the speed of development on the bike in 2010 was unbelievable. We made a few steps throughout the year with the help of the engineers in Japan and also our own work. The whole package made really good progress. Both of the riders we had were fantastic and did very well but the bike was also vastly improved from the GP in Lommel (Limburg, round 11 of 15) onwards. I think we ended the season with a very good motorcycle and the results, as well as what the riders said, showed as much. When you do so much in one year and you start from scratch - we had a new motorcycle following the season - it is hard to find fresh stuff to keep evolving. A stock bike these days is already a very efficient machine so you can only make small steps anyway. Compared to last year the improvements we can make are detail changes and slight increases in certain areas." 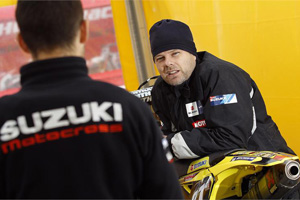 So no big forward evolution as discovered before the GP of Limburg last summer?

"If we could do that kind of leap again it would be great but it's not realistic. Last year before Lommel was more of a change of philosophy and sometimes that is not always possible. For this season the weight limit came down from 98 kilos to 95 and we already had a light bike so now we can run something like 96kg, which is another good step without having to do much; in fact you could still say we have a kilo to win but that is hard to do right now."

Does most of the work depend on the requests of the new rider?

"If we would have kept the same riders as last year then we would have had to do more and we would have done more. Valentin is a good rider, young and talented, but he had no real reference point for testing as the gap from a private team to an official bike can be quite big and he was already happy with our machine from the beginning. He was unlucky to have a few small injuries over the winter that limited us in terms of testing. We found a base line from where we wanted to start but we haven't been able to press forward because of the injuries." 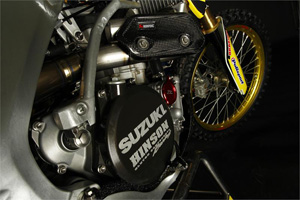 Generally speaking what is the difference between the race-bike and the RM-Z250 people can buy at the dealership?

"In spirit they are the same. The suspension is better and it is set-up specifically for the rider, which is a big thing. On the engine of any production 250 you have to do a lot of work to be competitive here and with our engine, which means an increase of a few horsepower and a few hundred revs. The weight is lower. Overall our machine is a refined stock bike and we are lucky that the Suzuki is already a very good motorcycle. If we are not talking about GPs then with the suspension tweaked to individual preferences it is great for regional or national races.


"Our bike is special but most parts are derived from stock. We start from the production model and improve; an example is the change of materials inside the engine and around the chassis to lower weight. Where aluminium or titanium can be used then we do so. Our service time-line is obviously much shorter and we can use lighter materials that need changing regularly.
The camshafts are changed, the cylinder head is prepared, and electronics are fine-tuned. The arrival of the fuel injection has given us a great tool to change the character of the engine with the mapping and with the support of the technicians in Japan we can exploit its potential. If you want a top bike at world level in MX2 then you have to do these things." 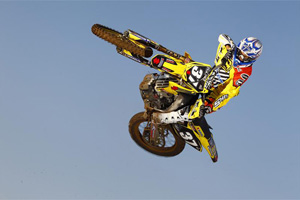 Is it becoming more difficult to find increased performance with the 250s amid all the talk of trying to reduce the noise?

"I think everyone in the industry has to decide if they want to reduce noise and if the answer is 'yes', then the FIM and the federations must set new rules; even with new rules there will always be development. There are many people who think that noise is only to do with the exhaust and this is not the case. When you want to reduce noise according to the 2mMax test that we now have by, say, another 2-3 decibels, then we have to look at engine mapping, camshafts, revs, airbox and all sorts of things. It will be more complicated and we will have to be more precise, probably even take some risks because if we need to reduce the noise level again then we want to be even more on the limit for the sake of performance. However I think we can reduce noise and still have a strong-performing bike. It is a question of setting the rules in stone. We might have to detune the bikes initially but then you look forward and try to find new ways to tune."