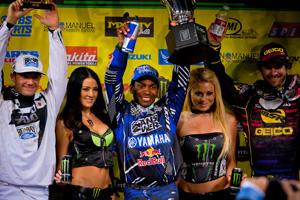 After a troubling few months, it looks like James Stewart is back on track, earning his second win a row and putting him within spitting distance of the AMA Supercross championship.

Stewart was a disappointment both on-track and off, as he was arrested for impersonating a police officer and put in poor showings in several races. After an emotional victory last week, the Yamaha rider now looks to be mounting a serious challenge for the title, with a nearly-flawless race that saw him dominate the entire night.

Much of the attention instead focused on fan favorite Kevin Windham, who put in an impressive performance to snag second. Windham had the crowd on his side after winning the heat race, and while everyone loves an underdog, it wasn't enough to get past Stewart. Chad Reed finished third, while points leader Ryan Villopoto saw his advantage shrink a bit with a fourth-place finish.

With Trey Canard out the rest of the year with an injury, it's now a four-man race for the championship, with just nine points separating the group at the top. Villopoto's still in the lead at 293, with Reed in second at 287. Ryan Dungey is just one point behind him at 286, while Stewart's recent success puts him at 284. It seems to be anyone's game with just two races left in this exciting season.