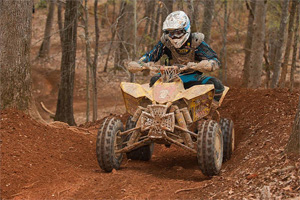 Rockstar Makita Suzuki's Chris Borich got back to his winning ways and piloted his Suzuki QuadRacer R450 to the top step of the podium at the Big Buck ATV GNCC, round four of the AMA 2011 ATV Grand National Cross Series, at Union in South Carolina.


Borich looked strong from the start, moving his Suzuki into second place on lap two and then taking the lead from round three winner Adam McGill on lap three. From there, the two-time series Champion put the hammer down on the rough and muddy course to claim his third win of the series.


"I was kind of bummed two weeks ago," said Borich. "We rode our hearts out at the last race and pretty much had it won and then we had a problem on the last lap near the finish - so it was good to get this win today.


"My Rockstar Makita Suzuki QuadRacer ran great today and I was able to pull away when I needed to," added Borich. "McGill and I had a good battle going, so it was good to get the win. Coming up, we have Loretta Lynn's and that's always a good race for me."


Reigning ATV XC1 Champion Borich has powered his Suzuki QuadRacer R450 to three victories and one fifth-place finish in the 2011 GNCC series and carries a 14-point lead in the series standings into the fifth round at the Loretta Lynn's GNCC on Sunday May 1st.