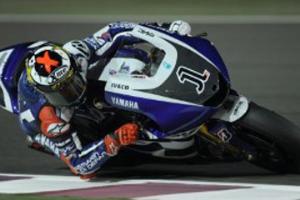 It's only two races into the 2011 MotoGP season, but already the crashes are beginning to pile up. A rainy weekend in Jerez, Spain, meant tough conditions for the riders, and a few notable names ended up going down.

When the dust settled, it was defending champion Jorge Lorenzo out in front, as the Yamaha rider ran a near-perfect race. Dani Pedrosa, who is racing through an injury that he will undergo surgery for shortly, was able to manage a second-place finish.

Lorenzo is now the points leader, thanks to some misfortune for Australian Honda rider Casey Stoner. Stoner dominated the preseason, won the opening race, and looked to be running well in Jerez, in second behind Lorenzo. However, a charging Valentino Rossi misjudged a turn and crashed into Stoner, sending them both off the track. Rossi eventually recovered and was able to finish in fifth, but Stoner did not end up finishing.

The American rider Ben Spies had a good race up until he made a similar error. Spies got all the way to second and it looked like Yamaha could be heading to a one-two finish. Yet he also misjudged a turn and ended up not finishing the race. Ultimately, that allowed Pedrosa to move up into second and Ducati racer Nicky Hayden to take third.