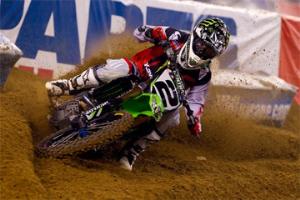 This year's AMA Supercross Premier Class season has been an up-and-down affair to say the least, with shocking race conclusions and big shakeups in the point standings seemingly happening on a weekly basis. This past Sunday's race in Arlington, Texas, was no different, as the day ended with three riders within seven points of each other with just four races to go.

Chad Reed was the points leader going in, but much like former points leaders James Stewart and Ryan Villopoto, bad luck seems to come with position. Stewart and Reed got tangled up early on for what seemed like the hundredth time this year, with both riders going down. Stewart, fresh off his arrest for impersonating a police officer, finished fourth, while Reed was never able to truly recover and placed ninth.

That meant we'd likely have a new points leader when all was said and done, and it was Villopoto who seized the day. The Kawasaki rider didn't end up winning the race, as Trey Canard of Yamaha put in an impressive wire-to-wire finish, but Villopoto's second place was good enough to surpass Reed in the standings.

Villopoto is six points clear of Reed, who is only one point ahead of defending champion Ryan Dungey, who took third at Arlington. Canard and Stewart are in the mix as well, with Canard 16 points back and Stewart 21 points behind.