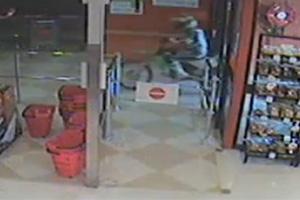 An Australian teenager's motorcycle-related prank has garnered him some international attention - but likely not the kind he was hoping for.

In a small town located just outside Melbourne, the teenager apparently attempted to ride his Kawasaki dirt bike through the local grocery store, with the entire incident captured on the market's security cameras. Teenagers pull pranks all the time, but it was the ending to this one that made the video go viral.

Ready for his great escape, the teen drove toward the automatic doors and expected them to open, allowing him to reach freedom. Instead, the doors stayed shut and he crashed into them. The boy wasn't hurt, but the gaffe allowed staff to catch up to the prankster.

Employees and staff weren't really all that amused with the stunt, as they said one woman had to jump out of away to avoid the daredevil. Had she been struck, she could have sustained serious injuries.

The store's manager, Jim Jowett, pulled no punches in describing his feelings on the matter to the Herald Sun.

"He's a bloody idiot, that's all I can say," he told the news source.

Staff apparently let the boy go before police arrived after the boy's aunt began verbally abusing the employees. Still, police expect that they'll catch up with the lad sooner or later, as his stunt gone wrong was caught on camera.