Crashes And Injuries Cause Supercross Shakeup 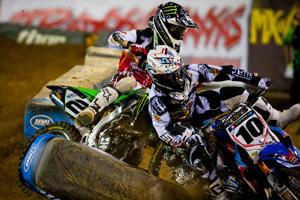 Ryan Villopoto's championship dreams hit a stumbling block this past weekend, as the rider failed to get out of the qualifying round at the AMA Supercross race in Jacksonville.

Under normal circumstances, Villopoto would be a shoe-in for the main race, but the rider met a bit of bad luck in his heat when he was hit from behind by another rider on the first turn. Villopoto was knocked off the track and couldn't regain his position at the front, meaning he ended up having to watch the main event from the sidelines.

It would have been the perfect time for James Stewart, second in the point standings, to make a move and try to close the 26-point gap between himself and Villopoto. Yet Stewart went down in a nasty crash almost immediately and was carried out of the stadium on a stretcher with a possible injury to his pelvis.

In the end Trey Canard who took advantage of the numerous crashes, getting his second win of the season. However, Chad Reed's performance that most people were watching, as his second place finish allowed him to leapfrog Stewart and end up within seven points of Villopoto in the standings. Defending champion Ryan Dungey got on the podium in third place, allowing him to also surpass Stewart in the point totals for third overall on the season.