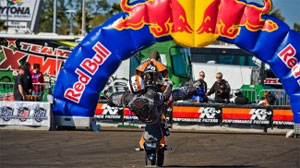 After a successful inaugural event during the 2010 Daytona 200 Week, the XDL Championship Series is returning to Daytona International Speedway on March 9-12.


Top XDL riders include Red Bull rider Aaron Colton, factory Yamaha rider and 2010 champion Bill Dixon, factory BMW rider and star of Inside XDL, Chris McNeil, as well as factory Aprilia ace Joe Dryden and Kawasaki's Kane Friesen. Riders are scored based on difficulty of the trick, execution, overall performance and crash as they show off their skills in head to head challenges, freestyle rides and the crowd favorite-Sickest Trick - in which riders attempt risky tricks to impress the audience.


XDL Championship Series, the fastest growing action sport in America, showcases five events in their 2011 season and kick-off their championship battle at Daytona, the only stop for XDL in the state of Florida.


Tickets for the XDL Championship are available for $5 on Wednesday and Thursday, March 9-10, $10 on Friday March 11 and $20 for Saturday's finale event. There is also a four-day ticket package available for $30. Kids 12 and under are free. More information on the series can be found at www.xdlshow.com.


Daytona 200 Week By Honda is highlighted by the historic Daytona 200 By Honda AMA Pro Racing event on Saturday, March 12, the Daytona Supercross By Honda on Saturday night, March 5 and the AMA Pro Flat Track events on the new Daytona dirt track March 10-11.


Tickets for all Daytona 200 Week by Honda events, including the XDL Championship Series, can be purchased at www.daytonainternationalspeedway.com and 1-800-PITSHOP.