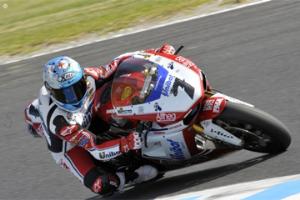 Carlos Checa, from Spain, rode his Althea Ducati to the finish line at the second of two World Superbike races at Phillip Island, capping off a perfect week, according to Cycle News.

The veteran racer was able to beat out fierce competitors, Max Biaggi and Marco Melandri to come out on top. He won the pole position via qualifying as well as both races, giving him a perfect weekend and total of 50 points, the news source reported.

Biaggi placed second and beat out Melandri by .3 of a second. Meanwhile, as Biaggi and Melandri fought for second, Honda's Jonathan Rea and BMW's Leon Haslam battled for fourth place. However, Rae came ahead by .3 of a second and Haslam landed in fifth place, reported the news source.

Leon Camier, riding his second factory Aprilia, came in sixth and beat out seventh place finisher, Noriyuki Haga by just over a half a second. Haga's former teammate Michel Fabrizio came in eight by just a tenth of a second.