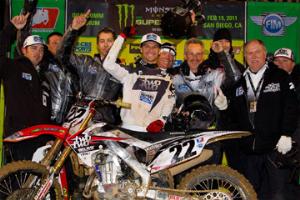 Chad Reed was able to pick up his first win of the 2011 AMA Supercross season this past weekend, holding off his challengers en route to an impressive victory.

The main event for the 450 class saw several riders take a tumble, including points leader Ryan Villopoto. Despite an early crash and a quick pit stop, Villopoto was able to make up the time lost and charged all the way back to seventh place. That was good enough to keep him on top of point standings - although James Stewart narrowed the gap from nine points to three after placing third.

Reed, on the other hand, had the opposite luck, grabbing the holeshot. He didn't go wire-to-wire, as several riders challenged him often and first place was swapped frequently. However, Reed always stayed near the top and was eventually able to get the victory after Trey Canard crashed.

Defending champ Ryan Dungey was able to bounce back from some disappointing performances in previous weeks to take second in the event, although he has still yet to get that elusive first win this season.

Canard, who crashed twice in the event, was still able to salvage a fourth place finish, while David Millsaps rounded out the top five.