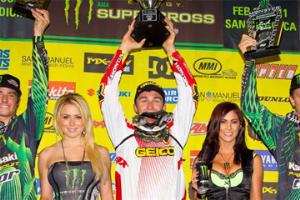 Despite the rain, Eli Tomac was still able to come out on top and place first at the San Diego SX Lites class - the rider's first win.

Tomac crushed the competition as he rode his Honda to the finish. He gained a huge head start making the other racers fight for second. Kawasaki rider Josh Hansen broke his hand two weeks ago and damaged it again during practice. However, he still managed to place sixth. He is expected to have surgery soon and will race again in the Lites West series in seven weeks, according to Cycle News.

However, while the foul weather made the track's soil greasy, causing some riders to find it difficult to drive, Tyla Rattray and Broc Tickle manged to place second and third respectively.

Rookie, Ken Roczen was left behind during most of the race and ended up in seventh place. Rounding out the top ten was eighth place finisher Ben Evans, Ryan Morais who came ninth and Kyle Cunningham who rode his Yamaha into the number ten spot, according to the news source.