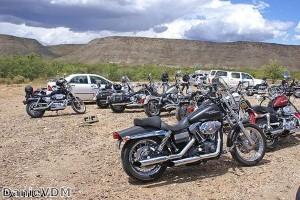 Those who have traveled to bike shows on their motorcycles, particularly in the state of New York, may have run into the state's "motorcycle only" checkpoints, ostensibly designed to catch stolen bikes and illegal modifications, on the roads leading up to the show.

The State of New York has instituted these checkpoints at many popular motorcycle events. The road leading up to the location of the gathering will feature a police checkpoint where all motorcyclists must stop off and submit to a search of their bike.

Several motorcyclists who dealt with this objected, stating that the practice was unconstitutional. The firm Proner and Proner decided to take on their case pro bono and file a lawsuit against the county of Schenectady in New York.

According to the group, some riders were detained for up to 45 minutes as their bikes were thoroughly checked for modifications or stolen VIN numbers. The group says that the National Highway Transportation Safety Administration has recently been looking to make the program nationwide.

Proner and Proner argue that the checkpoints violate the Fourth Amendment and qualify as unreasonable search and seizure, making them unconstitutional. Both sides have made their arguments and are awaiting a judge's decision, but the motorcyclists say that they're ready to take the case to the Supreme Court if need be.