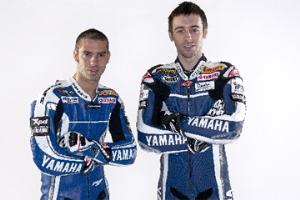 Yamaha recently announced the colors that Italian Marco Melandri and Ulsterman Eugene Laverty would wear during the 2011 World Superbike Championship.

The riders will sport the usual Yamaha blue corporate colors, but there will be no sponsorship logo. Sterilgarda, an Italian dairy food brand, has sponsored the team for since 2009 when Ben Spies won the World Superbike Championship.

Laverty has had an active pre-season, as the 24-year-old achieved the third fastest time during the latest test in Portimao, Portugal. However, Melandri only came in 15th out of 16. It should be noted that he has been recovering from shoulder surgery since December, but plans to be completely healed for the curtain-raiser.

"It was very important for me so soon after my shoulder operation to be careful and take it easy on the bike," Melandri told Cycle News. "I came here to focus on seeing the track and learning it along with some more time on the bike. We haven't pushed very hard at all but I'm feeling very comfortable on it despite the discomfort of the shoulder."

The team will soon travel to Philip Island for the February 21 and 22 test.