Roczen To Step Up In Class For Houston 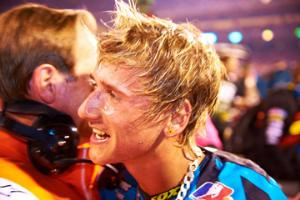 Ken Roczen, fresh off his first ever career podium finish in the Supercross Lites class in Anaheim, has announced that he will be stepping up in class for this weekend's Houston race, hopping aboard a KTM 350 SX to compete in the Premier division.

After Roczen's third place finish in Anaheim, the rider currently sits sixth in the points standings for the Lites West Coast championship. However, starting with this weekend's race in Houston, the racers will be switching over to the East Coast championship, so Roczen saw it as the perfect time to make the switch.

Roczen has reportedly been testing the KTM 350 SX in practices and gotten comfortable with the increased power.

"I feel comfortable on the 350 SX-F and am excited to ride the bike and continue my training and racing when the series heads to the east coast," Roczen told Cycle News. "I didn't want to stop racing just because the Lites series took a break and this is a way for me to continue to race and keep in shape."

The Red Bull KTM rider will also be providing feedback to the manufacturer, as this is the first year the 350 SX is being used in supercross.