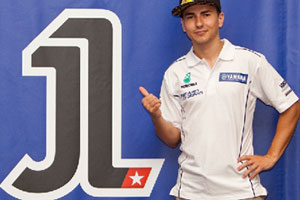 A triumphant 2010 MotoGP racing season witnessed Yamaha Factory Racing Team rider Jorge Lorenzo charge to World Championship victory with an incredible nine race wins and a record breaking 383 championship points earned. The status of reigning MotoGP World Champion gives the young Mallorcan rider the unique opportunity to change his racing number to No 1 as he defends his title this season. Lorenzo today confirmed his intention to run the coveted No 1 on his Yamaha Factory Racing M1 race bike, revealing a clever design incorporating his JL initials. This will be the first time a Yamaha MotoGP rider has worn the No 1 since Wayne Rainey defended his World Championship title in 1993 for the third consecutive time.


"Today I can reveal my No 1," said Jorge Lorenzo. "I am very proud because you have to work very hard to have the option to wear it. I have been lucky with my design because the No 1 works really well with my JL initials, maybe with different letters it would have been difficult to make it look right, I hope my fans will like it! I won't forget my No 99 this season, it will be there somewhere on my leathers because No 99 is in my heart. It was a difficult choice to change my number but I have earned the right for this unique opportunity to wear it."