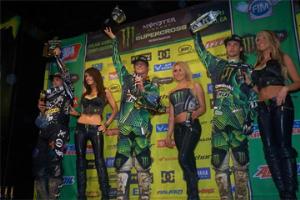 It's only four races into the season, but Monster Energy/Pro Circuit/Kawasaki looks to be dominating the AMA Supercross Lite division by racking up some early victories.

Josh Hansen was the points leader going into this Sunday's race in Oakland, and when all was said and done, he still would be. However, a surprise victory by his teammate Broc Tickle meant that the two Monster Energy riders would be sitting atop the standings together, one point between them.

Hansen took the first two races of the season, but only had a four point lead going into Sunday because of a disastrous fifth-place finish last week.

In Oakland, it was a two-man race all the way, as Hansen and Tickle shot out in front of the pack and stayed in close contention the entire time. On lap nine, Tickle was able to pass Hansen and ride to victory, narrowing Hansen's lead to one but extending Monster Energy's dominance over the rest of the field.

Tickle credited his win to a careful and composed riding style that allowed him to take advantage of Hansen's small mistakes.

"I was so focused out there tonight," Tickle told Cycle News. "I knew it was going to be really slick out there, so I tried to ride smooth and take it lap by lap."