Dungey Looking To Get Back On Top After Slow Start 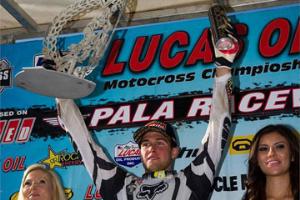 Going into the start of the AMA Supercross season, the overall favorite had to be young phenom Ryan Dungey. Despite only moving up to the top class last year, Dungey amassed a massive point lead over his competitors and rode his way to an easy championship.

He complimented that with a win for the U.S. in the prestigious Motocross des Nations, along with some offseason hardware in the form of numerous rider of the year awards. Naturally, most fans assumed that 2011 would be another year of Dungey dominance.

While that could still the case, Dungey hasn't gotten off to the best start so far. He came in second in his first race, followed by fifth in the second. Many riders would be thrilled with that result, but the slip meant riders like Ryan Villopoto and James Stewart could edge past Dungey in the standings. Making matters worse, Dungey finished behind both of those riders on his way to third place at LA Dodger stadium, despite having the lead at one point.

Heading into this weekend's race in Oakland, Dungey said that he was a bit bummed about his early start, but hopes to turn things around.

"It's important to keep moving in the right direction," he told the Cycle News. "You expect a lot from yourself, especially after all of the hard work you put in, you prepare to be the top guy, but through the whole season, it's a long one and a lot can happen, so we need to be aware of all the surroundings and do all that we can do that's in our will and leave the rest to the Man above."