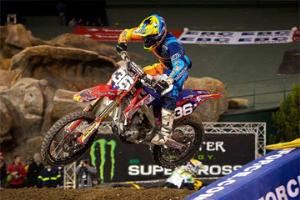 Cole Seely was able to notch the first win of his Supercross career, winning the Supercross Lites class at the LA Supercross event in Dodger Stadium.

The win was also the first for his team, Troy Lee Designs/Lucas Oil/Red Bull Honda, since they made the switch from Supermoto in 2008. Since making the switch, the team has earned quite a few high finishes, but hasn't been able to capture gold until now.

Even more impressive, Seely was able to win the race wire-to-wire, getting the hole shot and never surrendering it.

"I really couldn't have made it any easier on myself by getting the holeshot, which is what I've been searching for the whole year," he told Cycle News. "I just got a good start. I made some mistakes the first five laps, but when I settled into a good pace and kept reading 'breathe' on my pit board, it just felt like we were doing laps at the test track again."

After a few laps, Seely was able to mount a large lead and none of the other competitors ever really threatened him. The win put him in third for the season, behind Broc Tickle in second and Josh Hansen in first.