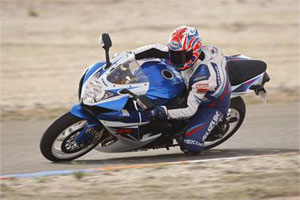 Three-time British Superbike Champion and Suzuki development rider John Reynolds has been involved in the development of the 2011 GSX-R600 K11, which has been hitting the headlines in the world's media recently for all the right reasons.


He said: "My first experience of the new bike was in Germany last June. Myself and test riders from France, Germany and Japan were asked to attend an intensive three-week test on the roads and on the track.


"We started our test program on the roads around Germany and with all major competitor machines present, we were able to asses the current machines and the new ones against their rivals. The initial feeling on the road for the 2011 bike was very good indeed and we rode in all weathers on all types of roads for a week and half.


"The focus of development with the new GSX-R600 K11 has been to make it a competitive race bike first and foremost, so after 1,000 miles of road testing we headed to a private test circuit facility to evaluate the bike in this environment. Already impressed by its road manners, I was blown away by the track ability of the 600. The test facility was fantastic, offering a real mix of fast straights, fast corners and very slow corners. It's a venue that tests every element of a bike and would highlight any shortcomings, but what it did was highlight how sorted the new bike really is: It's super-stable, yet extremely agile, enabling you to change line with ease. With the new brakes offering fantastic bite and feel and the reduction in weight, we finished the tests with very few changes to feedback to the engineers.


"It's my job to give my thoughts and with my fellow testers make recommendations for change, but we ended three weeks of testing with virtually empty note books. I don't put my name against anything I don't believe in, but I feel confident in saying that I believe Suzuki has moved the goalposts for 2011", he added.


Suzuki has analysed every component in the GSX-R600 and developed a cutting-edge machine that is 9kg lighter than its predecessor and offers a class-leading power-to-weight ratio in the production 600cc 4-cylinder category.


The engine has been re-designed using the advanced component-design techniques pioneered on Suzuki's MotoGP machines and it also gets radial-mount Brembo monoblock front brake calipers, Showa big-piston front-forks and a brand-new frame which translates into a lighter, more-agile, more-responsive Supersport machine with better drive out of the corners, stronger acceleration, higher top speeds and stronger braking all round.


The GSX-R600 is the first production Suzuki motorcycle to directly benefit from design techniques and technologies used on the GSV-R as used by Alvaro Bautista. The lighter pistons and more aggressive valve lift curves improve throttle response and produce stronger low-to-mid range torque, with the revised gear ratios using this torque for better race starts, quicker acceleration and stronger drive out of the corners.


The Brembo monobloc radial-mount calipers provide more powerful and consistent braking with greater rigidity for better rider feedback. They are also 405g lighter than the 2010 model and with less un-sprung weight that produces even better suspension performance.


A race-proven ramp and cam slipper clutch system gives the new GSX-R600 smoother downshifts which in turn improves rear tyre grip and stability when approaching bends by reducing the pressure on the clutch under hard deceleration.


Big Piston, 860g-lighter Showa Forks are quicker reacting along with improved damping and more-controlled compression under hard braking. This enhances grip and rider feedback with more-controlled weight transfer for a better turn in.


The frame is also completely new with race-proven geometry and a 15mm shorter wheelbase. This has been achieved without sacrificing swingarm length to maintain traction on corner exits. The main chassis alone is 1.35kg lighter with a 900g lighter swingarm.