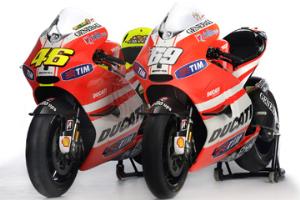 Ducati has unveiled the new machine that Valentino Rossi and Nicky Hayden will be riding on for the 2011 MotoGP season.

The Desmosedici GP11 will be the new weapons for Hayden and Rossi, who recently joined the team. The changes made to the bike compared to those of the GP10 were mostly based off of input from Rossi and Hayden during recent testing at the Valencia track in Spain.

Rossi and Hayden's new bike was introduced by designer Filippo Preziosi, who went over some of the new changes for the 2011 season.

"The main changes are in the engine, they are internal and external and are designed to achieve a more favorable, flatter torque," said Preziosi. "The aim of the changed aerodynamics is to reduce friction, therefore improving the maximum speed while reducing the lifting of the front wheel."

Preziosi also said that some work went into the front end, which proved to be a problem for rider Casey Stoner last year, as he suffered several crashes early in the season that led to some midseason adjustments. Stoner eventually left Ducati for Honda, allowing the team to bring in Rossi.