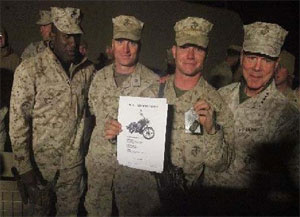 Operation Gratitude, the organization Victory partnered with in the campaign, today revealed that the organization's 600,000th Care
Package, containing the keys to a Victory Vegas 8-Ball Motorcycle, was personally delivered on Christmas Day by Marine Corps
Commandant, General James Amos, to a Lance Corporal deployed in the Sangin District of Helmand Province, Afghanistan. The Lance
Corporal, whose name will be revealed upon his return to the United States, is an infantryman with the 3rd Battalion, 5th Marines
(3/5), also known as the "Dark Horse Battalion."

"I received a phone call from a very happy young Marine on Christmas Day," exclaimed Carolyn Blashek, Operation Gratitude founder.
"He said: 'Your package means the world to me. I appreciate everybody who put something in that care package and everybody back
home. And I thank you for your love and support, as do all the other Marines who received packages from y'all. Have a very Merry
Christmas and a Happy New Year.'"

Ten days earlier, Blashek had flown to Washington DC to meet General Amos, who, upon learning the recipient was a Marine with the
3/5, had offered to deliver the 600,000th Care Package during his trip to Afghanistan. The Commandant met with more than 12,000 of
the 20,000 Marines deployed in Afghanistan during the ten day trip. While visiting with the "Dark Horse" Marines in Sangin on
Christmas Day, he presented Operation Gratitude's milestone care package.

"We were outside in the cold night air; about 200 Marines had just finished their Christmas meal. All of the senior leadership in
the Battalion were present," wrote General Amos. "The Battalion Commander called [the Lance Corporal] up in front of everyone and
I gave him the package. He read your letter to everyone before he figured out what the gift was. Then he read the second letter
from Victory and was handed a picture of the bike...that did the lad in. He was crying and his fellow Marines were cheering. I
don't think that it could have gone any better."

General Amos added: "God bless the many faithful Operation Gratitude volunteers for what they have done...over 600,000 times!! My
hearty thanks to all!"

The Victory Motorcycle will be presented to the Lance Corporal when the Battalion returns to Camp Pendleton in the Spring of 2011.
"Victory is always looking for meaningful ways to thank those serving in the military and our veterans," said Victory Motorcycles
General Manager Steve Menneto. "The opportunity to partner with Operation Gratitude and donate one of our motorcycles to the
organization's 600,000th care package means a lot to our company. We encourage everyone to continue finding ways to thank our
troops for all they sacrifice in service to our country."

The 3rd Battalion, 5th Marines, deployed in Sangin since late September, 2010, have faced an extremely dangerous and challenging
operational environment, sustaining numerous casualties. According to Lt. Colonel Jason Morris, the Battalion Commander,
significant progress has been made in fracturing the enemy while providing humanitarian aid to the local populace.

"We hope our Milestone package, along with the approximately 1000 regular packages sent during our Holiday Drive, brought good
cheer to the 3/5 Marines during this difficult time away from loved ones," said Blashek. "We look forward to welcoming home each
of the Marines in the Spring and personally thanking them and their families for their courageous service to our nation and the
cause of freedom." 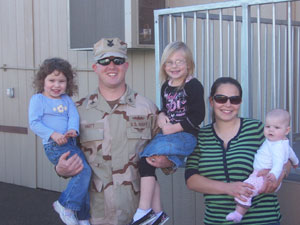 In addition to donating a motorcycle to Operation Gratitude's efforts during the recent holiday season, Victory also gave away a
second, brand-new 2011 Victory Vegas 8-Ball to Jonathan Hartt, T1/E-6 of the U.S. Navy. News of Hartt receiving the bike was the
culmination of Victory's Hometown Heroes initiative. Beginning in December, Victory encouraged friends and family of members of the
military to submit short videos explaining why their loved one was a Hometown Hero. Victory invited the public to vote on the
entries and the video submitted by Hartt's wife and three children, explaining why he was their hero, received more votes than any
other submission. The gift of a 2011 Victory was a thank you to Hartt for his efforts to serve our country and for setting a heroic
example for his family and friends.

You can see Jonathan's video along with the other entries at Victory's
Hometown Heroes Website.

"Across the globe, there are men and women who have served or are serving in our military that are Hometown Heroes," said Menneto.
"Honoring these people, not just for their service to our country, but also for what they do to make the lives of those around them
better each day, provided the motivation to launch an initiative like Victory's Hometown Heroes. We're proud of all of our troops,
and couldn't be happier to give away a bike as a sign of our appreciation."

Both of the motorcycles feature a special military badge, giving a unique twist to the sleek-looking, all-black bikes. Including
the badge on these motorcycles is Victory's way of publicly honoring the recipients and thanking these individuals for their
service.

Operation Gratitude annually sends 100,000+ care packages filled with snacks, entertainment items and personal letters of
appreciation addressed to individually named U.S. Service Members deployed in harm's way. The organization's mission is to lift
morale, bring a smile to a service member's face and express to our Armed Forces the appreciation and support of the American
people. Each package contains donated product valued at ~$125 and costs the organization $15 to assemble and ship. For safety and
security, assembling of packages occurs at the Army National Guard armory in Van Nuys, California. Since its inception in 2003,
Operation Gratitude volunteers have shipped more than 600,000 packages to American Military deployed overseas.