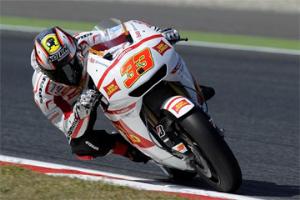 Former MotoGP racer Marco Melandri has confirmed that he underwent shoulder surgery over the Christmas weekend in order to repair some minor damage that was preventing him from operating at his peak during the season.

Melandri is a former 250cc World Champion who most recently raced in the MotoGP series. His best finish was second overall in 2005, but he has since struggled on a variety of different bikes and teams. Last year he finished tenth on the Gresini Honda RC212V before announcing he would be making the switch to the World Superbike series for the 2011 season.

Now onboard a Yamaha YZF-R1, Melandri has been getting used to his new team and bike with various tests. However, he's been hampered by a shoulder flare-up that also bothered him during the season. With time off for the holidays, Melandri elected to repair the damage with surgery in the hopes that he will be fit for the team's next test on January 26th in Portugal.

The surgery was performed by Dr. Giuseppe Porcellini, who also recently fixed up a lingering issue with Valentino Rossi's shoulder. Melandri will be in a brace for at least two weeks.

The World Superbike championship will kick off February 27th with a race on Phillip Island in Australia.