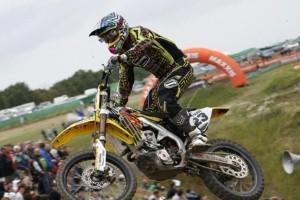 The 19-year-old rider exploded onto the Grand National Cross Country series last year, finishing as the top amateur in the competition. This year, he'll make his debut in the XC2 Pro Class. Yamaha, who called the rider an "amateur sensation," has announced that Ashburn will be given the number 16 and ride a YZ250F in competition.

"I am really excited to be on Yamaha and I am looking forward to winning with the Obermeyer/Am-Pro Yamaha team," said Ashburn.

As part of the contract, Ashburn will also compete in off-roading events in the OMA National Series, where he will ride the Yamaha YZ450F. Ashburn demonstrated repeated success in this competition throughout the year, finishing as the top overall amateur. In one race, he was able to make his way to the front of the pack, surprising many of the pro riders who had the advantage of a factory-supported bike and engineering team behind them.

"I feel that Jordan represents the future of our sport and has been a stand out as an amateur, and we are happy to be part of him beginning his pro career," said Keith Obermeyer, owner of the team.