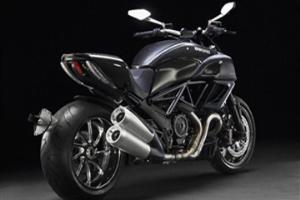 Italian manufacturer Ducati has announced a partnership with Mercedes-Benz' AMG performance division, as the two companies will co-sponsor events and marketing campaigns.

Ducati was on hand at a Mercedes-Benz event at the Los Angeles Convention Center during a preview event for the upcoming LA Auto Show. Ducati CEO Gabriele del Torchio and MotoGP racer Nicky Hayden brought along the Ducati Diavel, a model that had previously been revealed at the EICMA show in Milan but had not yet been seen in North America.

The new Diavel produces 162 horsepower and 94 lb-ft of torque. It's expected to hit U.S. showrooms in February.

Meanwhile, Mercedes had a debut of their own: the 2012 CLS 63 AMG. The four-door coupe has been popular for the automaker, and the new model features an optional performance package that boosts horsepower above 550.

Mercedes-AMG CEO Ola Kallenius said that the two manufacturers had a lot in common.

"Both companies share the same values: racing as the driving passion, and high performance plus exclusivity as the central brand messages of both AMG and Ducati," he told USA Today.

The luxury German automaker has previously dabbled in the two-wheel market, recently showing off an electric scooter concept through their Smart subsidiary.