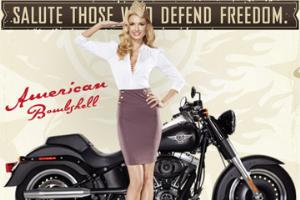 Harley-Davidson and the military have a long history, with the U.S. Armed Forces tapping the manufacturer to provide thousands of bikes in the two World Wars. Since that time, veterans and Harley riders have had a close link, as the company's products are popular with former and active military personnel.

Last year, Harley-Davidson instituted "Military Appreciation Month" as a way of supporting the troops. The manufacturer is bringing back the promotion this year with a number of new initiatives designed to honor military members.

The motorcycle company is partnering with supermodel Marisa Miller, who has previously appeared in a number of advertisements for the company, to produce a series of posters and postcards that will be distributed at Harley dealers. The images show Miller in a number of uniforms representing all five branches of the armed forces along with Harley bikes.

In addition, those with a military I.D. can pick up a free bandana at any Harley-Davidson dealer. They'll also be entered for a chance to win a "Freedom Pass." The winner and five of his fellow servicemen will all be given free bikes in addition to a trip to the company's museum in Milwaukee, Wisconsin.