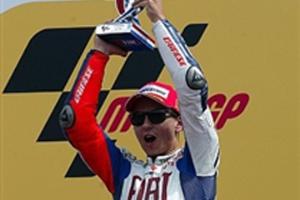 Jorge Lorenzo has broken the record for most points in a single season after his ninth win this weekend at Valencia, breaking Valentino Rossi's previous record.

The Spaniard had closed the book on the 2010 MotoGP season weeks ago, securing the 2011 title with several races left. Yet his win gave him 383 points on the year, making him the all-time leader for points in a season.

"Winning here in front of my home crowd at this special track is one of the happiest moments of my life," he told Ultimate MotorCycling. "We are proud to have got the record for the most number of points with 383, I used to be known as a crazy rider who crashed too much so to demonstrate consistency in this way makes me proud."

The possibility of breaking the record was in doubt early as Lorenzo did almost crash in the very beginning of the race. He was able to make the save and continued strong, passing leader Casey Stoner with eight laps to go. Stoner finished second while Rossi took third.

In terms of the final standings, Lorenzo finished as champion with Dani Pedrosa in second, Stoner in third and Rossi in fourth.