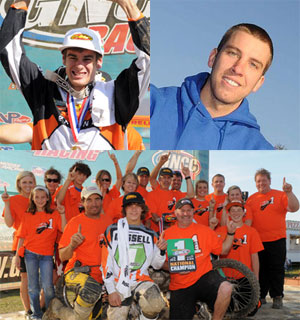 KTM Motorsports is excited to announce that Kailub Russell, Cory Buttrick and Charlie Mullins will race the XC1 class in the 2011 Grand National Cross Country Series for the KTM Factory Off-Road Racing Team.


All three riders will race the premier XC1 class aboard a combination of 350 SX-F and 450 SX-F race machines. Kailub Russell has had two successful seasons with the Austrian manufacturer winning both the 2009 and 2010 GNCC XC2 Championship titles. During his 2010 XC1 Championship campaign he raked in 8 overall wins and 2 additional podiums before wrapping up the championship one round early. For 2011, he will move up to the XC1 class where he is sure to be a threat for the championship.


Buttrick will be returning for his third season as a Factory KTM rider. Buttrick has ridden KTM's throughout his entire amateur career winning numerous amateur championship titles. Buttrick first appeared under the KTM Factory semi when he competed in the 2009 GNCC XC2 Championship Series finishing 2nd overall behind his teammate Kailub Russell. In 2010, he competed in the XC1 class where he landed on the podium 4 times and earned 1 race win. In addition to his GNCC efforts, Buttrick will also contend the 2011 AMA National Enduro Series.


The newest member of the KTM Factory team is the newly crowned 2010 National Enduro Champion Charlie Mullins. The North Carolina resident is new to the KTM brand and looking forward to joining the leader in off-road championship titles. "I am very excited to join the KTM Team for 2011. I believe they make an incredible product and I am excited to run factory equipment with a solid team behind me," remarked Mullins. In addition to his National Enduro Championship Title, Mullins also finished 2nd overall in the 2010 GNCC XC1 Series where he earned 3 race wins and three additional podium finishes in 2010. For 2011, he will race the GNCC and National Enduro Series.


"We are very excited about our GNCC line up. All three riders are capable of winning the XC1 Championship. We are hoping to earn multiple race wins and lots of podium finishes in 2011," remarked KTM Off-Road Team Manager Antti Kallonen.