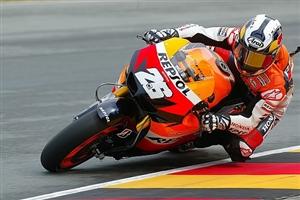 With the MotoGP series' only new track of the season looming this weekend, riders are prepping for a race on an unknown circuit - but at least one is looking forward to the homecoming.

Dani Pedrosa, the Spanish-born Honda rider currently in second place in the 2010 World Championship standings, is eager to close the gap this weekend on fellow countryman Jorge Lorenzo, who still holds a commanding lead. Both riders will be racing in their home country, as the series makes its way to the recently-built MotorLand Aragon circuit for the first time.

Pedrosa, who is coming off of back-to-back races, says that new motorcycle parts and accessories have helped him turn his Honda RC212V into a faster bike, allowing him to move up the point standings. He'll be looking to build off his recent success with a win on his home turf.

While MotoGP rules state that riders cannot use their race bike on a track, Pedrosa has already tackled the circuit on a Honda CBR1000RR street bike in order to get a feel for the layout.

"I'm looking forward to arriving at MotorLand Aragon and trying the new track on the RC212V," he said. "It's very different to the ones we are used to racing at in the MotoGP championship, and so it will be really interesting this weekend... It's always very nice to race in Spain and I can imagine that the atmosphere will be incredible."